Check out the results from the third FNCS Qualifier.

The FNCS Chapter 2 – Season 3 Qualifiers are nearly over after two straight weekends of 9 plus gameplay hours per region. Through three qualifiers, we’ve seen some familiar faces top the leaderboards in all seven competitive Fortnite areas. Some of the usual suspects include DreamHack Online Open Champions Liquid STRETCH and 100T Arkhram, who both have punched their ticket to stage two already. With $5 million up for grabs, crunch time is now for those who haven’t yet qualified.

Only one qualifier remains after today with heats soon to follow. Keep in mind that the top 50 in Europe, NA East, NA West and Brazil will secure a spot in stage two. Asia, Middle East and Oceania all produce 25 qualifiers each tournament. Check out results from Qualifier One and Qualifier Two to see who will be in stage two thus far.

With all that said, let’s take a look at how the action played out in the penultimate FNCS Chapter 2 – Season 3 Qualifier.

Gambit Toose of Russia took first place in Europe with 55 points. He won two of six matches in the Grand Finals while accumulating 18 eliminations. This win marks his first in Chapter 2 – Season 3’s FNCS and his second straight stage two qualification. With $5K USD in his pocket, Toose will look for much of the same in the final FNCS Qualifier.

French player MCES Xsweeze finished just one point behind Toose in second place. Although he did not earn a Victory Royale, Xsweeze’s 21 eliminations led all other players in the Grand Finals. He’s guaranteed himself a spot in heats and added $4.2K USD to his career earnings. Other notables that finished inside the top-50 include E11 TaySon, NRG benjyfishy, XL Wolfiez and several others. 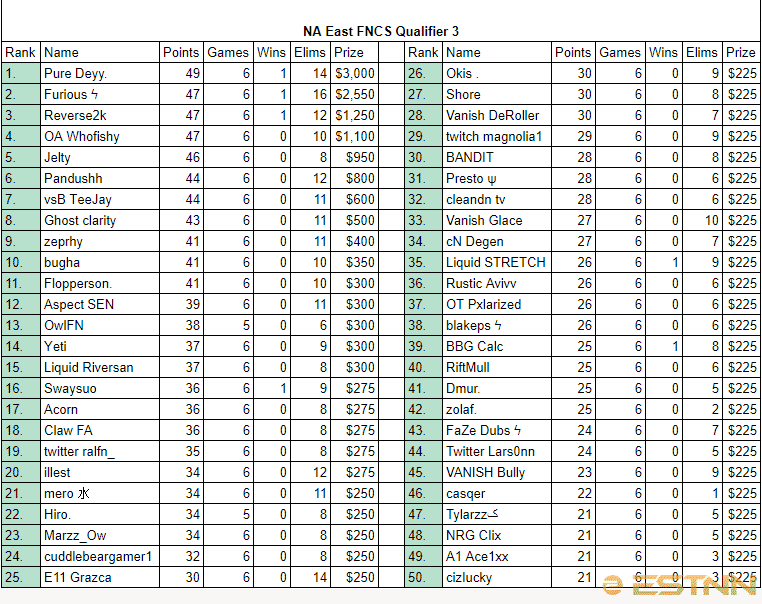 After lurking around leaderboards for multiple weeks in a row, Pure Deyy took home his first FNCS Qualifier victory. Across six matches, Deyy managed a Victory Royale and 14 eliminations in total. His 49 point performance put him two points clear of second place. This result comes just a few weeks after Deyy played well in the DreamHack Open. Keep a close eye on Deyy as he continues to trend upward.

FNCS Invitational Winner Furious finished the third qualifier in second place. He matched Deyy with one Victory Royale and even managed more eliminations than the winner. However, Furious fell a few placement points short of taking first place. Nevertheless, Furious continues an impressive stretch of Fortnite spanning multiple seasons. Former TSM player Reverse2k rounded out the top three, also with 47 points. All 50 players listed above will appear in stage two. 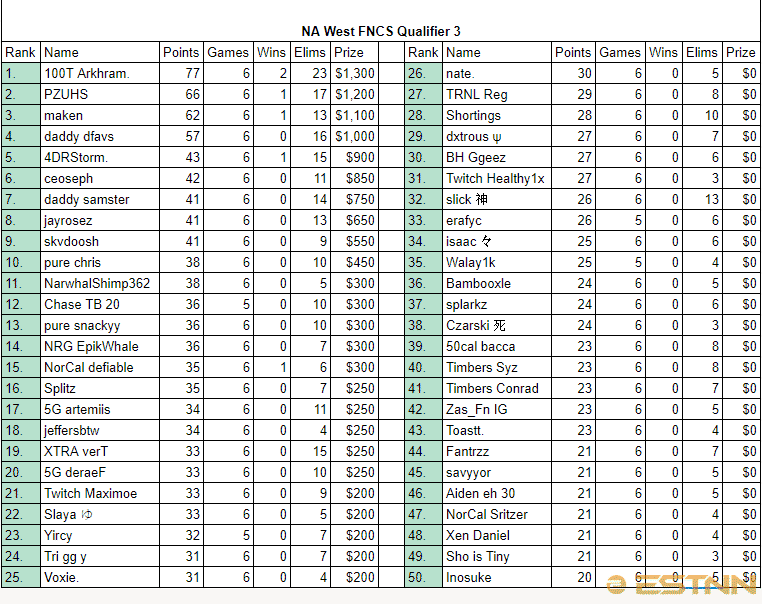 Another NA West Fortnite tournament victory went to 100 Thieves’ Arkhram. This time, Arkhram smashed the entire region with 77 points across six matches, including two Victory Royales and 23 eliminations. The talented youngster just does not seem to be slowing down, especially considering his DreamHack Online Open win only a few weeks ago. Arkhram has his sights set on his second FNCS Championship.

PZUHS finished in second place overall with 66 points. He earned himself one Victory Royale on top of 17 eliminations. NA West standout maken rounded out the top three with 62 points. Some other noteworthy names inside the top 50 include DreamHack Online Open Champion 4DRStorm, NRG EpikWhale and XTRA verT. 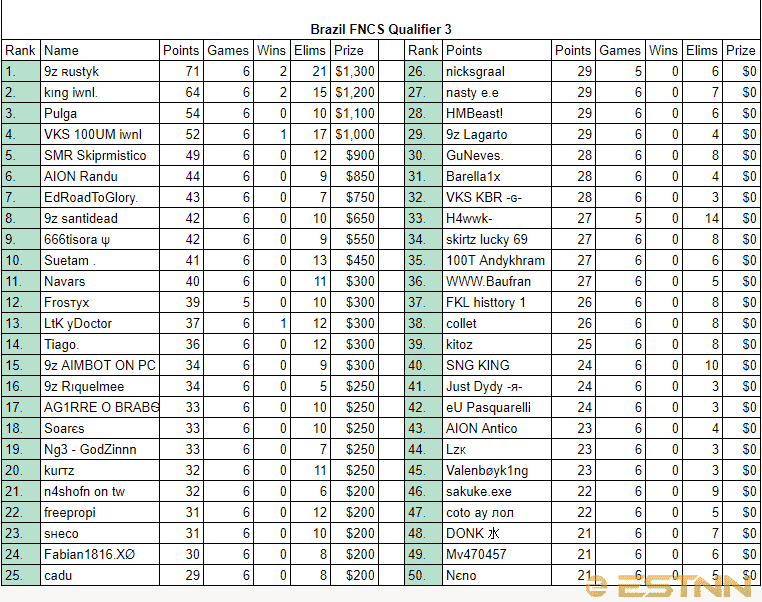 King fell short of first place with 64 points. Despite performing well in the final match, he could not eclipse 70 points. After winning the second qualifier, king is shaping up to be one of the favorites in the Brazil region. Another top Brazilian player in Pulga rounded out the top three with 54 points. 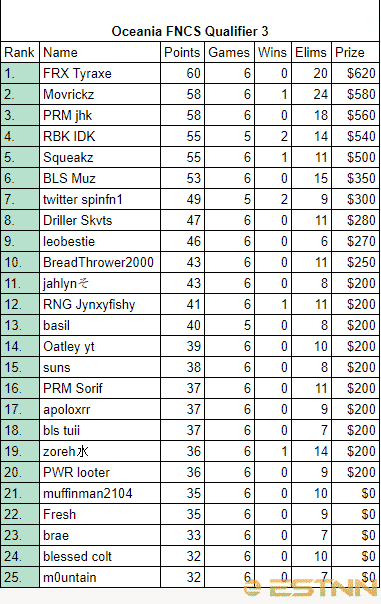 Tyraxe took first place in Oceania and earned his second straight stage two qualification. He did not manage a single Victory Royale but compensated with 20 eliminations. He will move into heats with fellow OCE players Movrickz and PRM jhk, who both finished with 58 points. One of Oceania’s best in volx earned his third straight qualification. 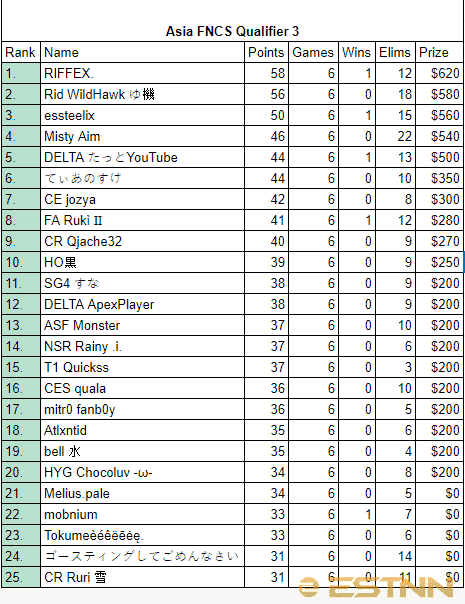 RIFFEX won Asia’s third FNCS Qualifier with 58 points. A mixture of consistency, one Victory Royale and 12 eliminations earned the Asian player his first qualification for stage two. He and 24 others listed above will battle for a Grand Finals position in a few weeks. 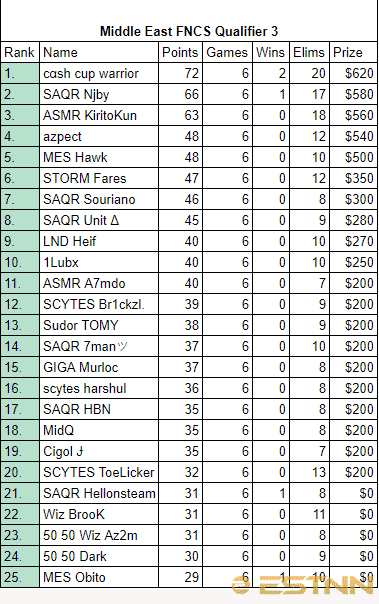 Cash Cup Warrior’s 72 points finished behind only NA West’s Arkhram for most points during the third qualifier. He dominated the finals with two Victory Royales and 20 eliminations. He and several other talented Middle East pros will find themselves in gears, hoping to make the Grand Finals.