NA East takes center-stage in our second analysis of the upcoming FNCS Finals. This region undoubtedly features some of the world’s most recognizable Fortnite players. Chief among them is Fortnite World Cup Champion Bugha. Even with $3 million in the bank, Bugha is still seeking more victories. The same mentality applies to all 400 players who have reached this stage.

Chapter 2 – Season 3, in general, has produced some exciting tournament moments. However, it will all culminate this weekend with the FNCS Champion taking home $50K USD. Before breaking down each heat, let’s look at the format heading into this weekend’s finalè.

Epic Games has separated the top 400 players from the FNCS Qualifiers into four heats, each with 100 players. All four heats will last three hours with six total matches. At the end of heats, the top 25 players per heat will advance into the Grand Finals. Only one player will win the grand prize and the Axe of Champions. Let’s take a look at all four heats and identify some of the top players.

Heat one features a notable amount of top controller players in the NA East region. Scoped is worth mentioning right off the bat, considering his success in solo tournaments. Although he has struggled to stay motivated in Chapter 2 – Season 3, Scoped is one of NA East’s best players. Most recently, he took sixth place in the FNCS Invitational Grand Finals. He’s certainly a worthy candidate to reach the FNCS Finals this time around as well.

Co1azo, Ajerss and mero are also controller elites looking to make a splash in the Grand Finals. Of the three, mero has played consistently well through the qualifiers. However, Co1azo and Ajerrs have both also shown up in solo tournaments recently.

The most noteworthy name in this heat is the Solo Cash Cup king himself, NRG Unknown. After switching from a controller to a keyboard and mouse, Unknown has not seen the same level of success. Regardless, Unknown has made it this far and could undoubtedly earn himself a spot in the Grand Finals.

One of NA West’s top players, Liquid Riversan, journeyed to NA East for the FNCS and finds himself in heat one. We’ve seen players like NRG Edgey and Liquid Cented find immediate success after switching regions, and Riversan is looking to do the same. He finished FNCS Qualifier 3 in 15th place. All he needs is a top-25 to reach the Grand Finals. Some others worth considering in heat one are Klass, Pure Deyy, nanolite, E11 Grazca, TSM MackWood and Acorn. 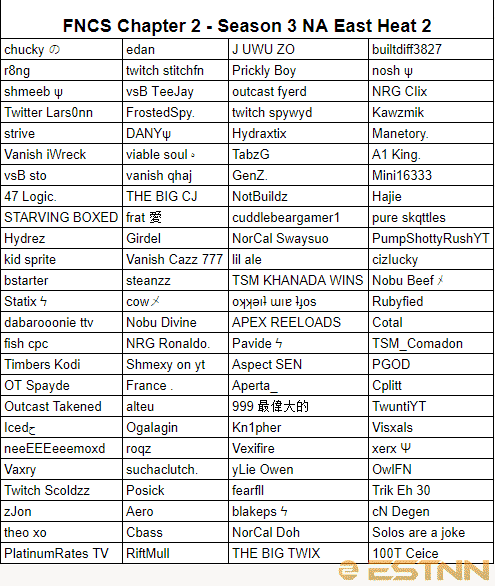 Heat two features some outstanding solo players. First off, we have TSM Khanada, who has won multiple Solo Cash Cups over the past two seasons of Fortnite. In Chapter 2 – Season 3, Khanada played exceptionally well in the FNCS Qualifiers. He took third in Qualifier 1, tenth in Qualifier 2 and 11th in Qualifier 3. He’s one of NA East’s premier solo players and should find his way into the Grand Finals.

NRG Clix will compete in heat two after reaching the finals in all four Qualifiers. He qualified three out of four times for stage two during this season’s FNCS competition. Mechanically, Clix is one of the best to play Fortnite. With FaZe Bizzle likely alongside as his coach, expect Clix to coast into the Grand Finals and contend for his first FNCS Championship.

Heat two also features three-time FNCS Finalist TSM Commandment. We saw what Commandment was capable of in solo competitions last season. He won the first week of the FNCS Invitational and finished in 21st place overall. Commandment’s talent is unquestionable. He will need every ounce of it to qualify out of heats. Like many others, Commandment is seeking his first FNCS title.

SEN Aspect is another name worth looking out for heading into the FNCS Finals. Back in Season X and Chapter 2 – Season 1, he was one of the top solo players without question. Just recently, Aspect re-emerged as a top solo player. He took 15th place in the July DreamHack Online Open. Aspect then rifled off two qualifications for stage two. He could turn some heads in heat two. Other notable players in heat two include 100T Ceice, OwlFN, cizlucky, nosh and Vanish Jahq. 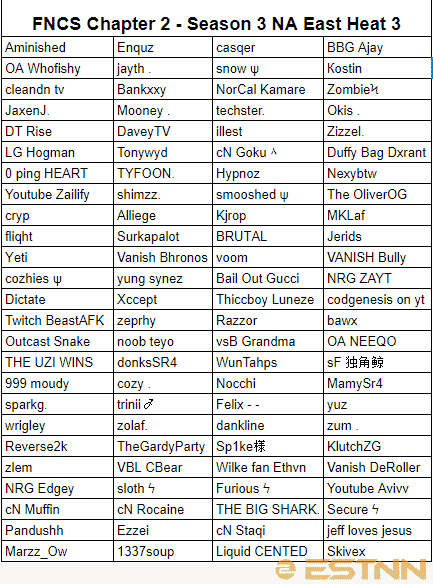 Leading the way in heat three is the outstanding duo of NRG Edgey and Liquid Cented. Unfortunately, they will be riding solo in this tournament. Edgey took tenth place in the first FNCS Qualifier, which got him to this point in the competition. Cented has fared a bit better. He participated in July’s NA West DreamHack Online Open, grabbing a third-place finish. He then finished Bugha’s Throwback Cup in second place. Cented should be on the fast track to the Grand Finals.

FNCS Invitational Champion Furious had not slowed down one bit since his major win last season. He most notably finished runner-up in Qualifier 3. Furious also has a slew of impressive Solo Cash Cup finishes. He hopes to keep his momentum from last season going in the FNCS Finals.

OA Whofishy is a player who continues to grab headlines in the NA East region. After taking tenth place in last season’s FNCS Invitational, Whofishy achieved a 13th and 4th place finish in two separate DreamHack Online Open tournaments. He rounded out the FNCS Qualifiers with a pair of fourth-place finishes. Expect results from Whofishy in heat three.

Reverse2k has been on a nice run of late as well after parting ways with Team SoloMid. He took third place in Qualifier 3 and is seeking another organization. There’s no lack of motivation from Reverse2k heading into heats. Other notables in this heat are illest, NRG Zayt, Marzz and vsB Grandma. 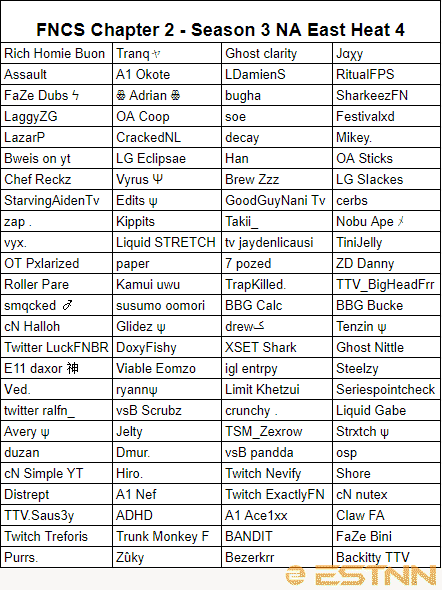 Heat four will inevitably produce some fireworks given the amount of talent within. First, we have Fortnite World Cup Champion Bugha. He remains one of the best solo players in the world, even one year removed from his $3 million day. As of late, Bugha managed a second, tenth and thirteenth place finish in the last three FNCS Qualifiers. He will be looking for his first FNCS title.

Liquid STRETCH is also present in this heat. Not only is he Bugha’s former duo partner, but STRETCH is arguably the best solo player in the NA East region. He won the July DreamHack Online Open and the second FNCS Qualifier. STRETCH resonates well with this meta and should be successful despite the stiff competition.

Coming off his 30-day ban, BBG Bucke is back and ready to show how talented he is at Fortnite. His qualifier results amounted to a second and fourteenth on days one and four, respectively. Bucke also finished top-20 in the August DreamHack Online Open. He is easily one of the favorites to reach the Grand Finals.

FaZe Dubs is also back from a 30-day ban and continues to showcase his elite skills. He qualified twice for FNCS stage two and took fourth place in the Bugha Throwback Cup. Let’s not forget Dubs’ runner-up finish behind STRETCH in the July DreamHack competition. A win in FNCS Chapter 2 – Season 3 for Dubs would be career-defining.

The final heat will be the toughest of all the bunch. Some other outstanding players in this heat include BBG Calc, TSM ZexRow, Avery, Ghost clarity, Assault, LG Slackes and many more.

Charity For The Helpless

Earthquake Removed From Pokemon For Being Extremely Insensitive

Earthquake Removed From Pokemon For Being Extremely Insensitive