ESTNN breaks down all four heats ahead of the FNCS Chapter 2 – Season 3!

Competitive Fortnite is on the precipice of yet another $5 million tournament finale. This time around, it is a solo format in what is one of the more polarizing seasons of Fortnite. Despite the Marauders and Loot Sharks, Chapter 2 – Season 3 has produced some exciting moments. The emergence of players like Kami, Xsweeze and Snayzy are notable bright spots from this season. Now that the FNCS Qualifiers are over, here is a brief look at the format before diving into each heat in the European region.

Epic Games has separated the top 400 players from the FNCS Qualifiers into four heats, each with 100 players. All four heats will last three hours with six total matches. At the end of heats, the top 25 players per heat will advance into the Grand Finals. Only one player will win the $80K USD grand prize and the Axe of Champions. Let’s take a look at all four heats and identify some of the top players heading into stage two.

Heat one for Europe features some notable names worth looking out for as the competition kicks off. First and foremost, we have to look at teeq, who went from last to first in DreamHack’s first-ever Online Open tournament for Fortnite. The Polish standout barely qualified for the semi-finals and then bested DreamHack Anaheim Champion 100T MrSavage in the Grand Finals. BL Anas might be the favorite heading into stage two, however, given his recent performances. He took ninth place in the July DreamHack Online Open Finals and 16th at the FNCS Invitational.

Seven-time Fortnite World Cup Qualifier Vitality Stompy is also in heat one. Although he’s been relatively silent since the Chapter 2 – Season 2 Finals, he could easily qualify for the Grand Finals. GODSENT znappy is also worth keeping an eye on in the heat one, considering his 24th place finish in the FNCS Invitational. HR Qvado, EP Queast, crr, MCES PodSai, COOLER Noward and Wave steelix are all in play to reach the Grand Finals. 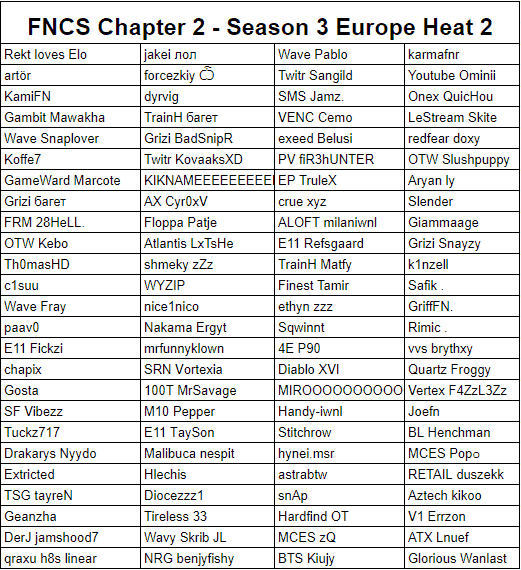 Heat two objectively features some of the best players in the entire European region. This heat is arguably the most difficult when looking at the pool of talent. Leading the way is DreamHack Anaheim Champion and ESTNN’s number one ranked player 100T MrSavage. The young Norweigan finds a way in solos. When he’s down and out, MrSavage manages to rally back regardless of the circumstance. He also took second place behind teeq in the July DreamHack Online Open.

Another player who needs no introduction is NRG benjyfishy. Like his duo partner MrSavage, benjyfishy continues to separate himself as a solo player. He’s won multiple Solo Cash Cups and finished the July DreamHack Online Open in sixth place. Benjy understands this meta and continues to deliver in solos despite not particularly enjoying the format. To complete the trio, top controller player ATL LeTsHe is also in heat two. The German-native completed Chapter 2 – Season 2 with an eighth-place finish in the FNCS Invitational. Although he has struggled a bit recently, no one should overlook LeTsHe.

Bugha Throwback Cup Winner Kami is another top player in this heat. He took fourth place in the July DreamHack Online Open and third in the final FNCS Qualifier. Some other top players in this heat include Th0masHD, E11 TaySon, Grizi Snayzy, Grizi BadSnipR, and many more. Some hearts will certainly break with the results of this heat. 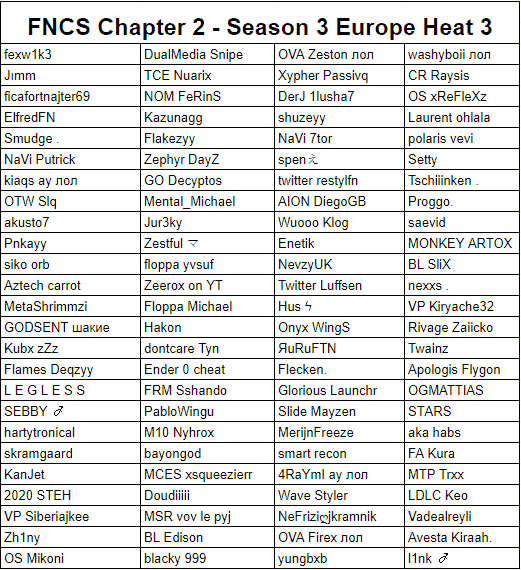 Compared to heat two, heat three does not offer as many marquee names. DreamHack Winter Champion Merijn is in this heat. Although some may not recognize him, Merijn has been one of the most consistent solo players. He finished the DreamHack’s July tournament in fifth place. Fortnite World Cup Champion Nyhrox had himself a nice run in solo competitions back in Chapter 2 – Season 1. He has cooled off quite a bit since then. Also in heat three is GODSENT wakie, who placed 24th in the July DreamHack Online Open. He has also played consistently well through the FNCS Qualifiers.

VP Kiryache32 had quite an impressive solo run similar to Nyhrox, but he’s recently admitted his frustrations with Chapter 2 – Season 3. Nonetheless, he remains one of the better players in Fortnite’s European scene from a talent standpoint. MCES xsweeze might be the favorite in heat three, considering his results in FNCS Qualifiers 2 and 3. He managed a second-place finish in Qualifier 3 and claimed victory in Qualifier 4. Xsweeze has been one of the standout players this season and will look to continue into stage two. Na’VI Putrick, Saevid and skram are some other notables in this heat. 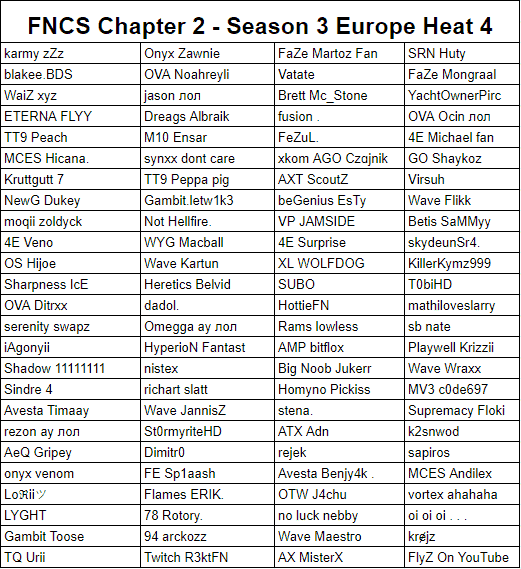 Heat four will be the last before the Grand Finals of the FNCS Chapter 2 – Season 3. First off we have rezon ay, who has seen an unexpected uptick in results recently. He won the Mongraal Cup back in early July and then rifled off and FNCS Qualifier 1 victory earlier this month. Rezon ay also took 14th place in the FNCS Invitation, which ended Chapter 2 – Season 2.

Fan-favorite FaZe Mongraal has improved his tournament results significantly since the beginning of Chapter 2 – Season 3. He had an eighth-place finish in a recent Solo Cash Cup and followed that up with a fifth place in the EU Bugha Throwback Cup. Mongraal certainly has a lot to prove and is still seeking his first major tournament victory. Expect Mongraal not to stream and grind out a qualification into the Grand Finals.

FNCS Invitational runner-up XL Wolfiez should also find some success in heat four. Although controller players are most definitely struggling this season, Wolfiez is one of the best and should not have too much trouble qualifying. Chapter 2 – Season 2 Champion Andilex ranked number three in ESTNN’s recent top Fortnite players list, and for a good reason. He’s been one of the most consistent players since the debut of Chapter 2. The Frenchman is seeking his second straight FNCS Championship.

The Fortnite Champion Series’ first female finalist Moqii is also in heat four along with mitr0, Gambit Toose, FNCS Invitational Champion Wave JannisZ and Gambit l3tw1k3 are some others to consider as top talents in this heat.

Stay tuned to ESTNN for continued coverage of the FNCS Chapter 2 – Season 3 throughout the week!