ESTNN breaks down all leaderboards from the final day of FNCS Chapter 2 – Season 3.

With $5 million and the in-game Axe of Champions harvester on the line, finalists had plenty of incentive to deliver outstanding performances. The best 100 competitors in each region competed in six final matches to determine the winner. Let’s take a look at how each region’s finale played out.

E11 TaySon completed one of the most impressive runs from heats into the Grand Finals over the last two days. After winning heat two on Saturday, TaySon of E11 Gaming was one of the favorites heading into the Grand Finals. The young Slovenian amassed 22 eliminations one Victory Royale en route to 60 points. He completed a comfortable 11-point victory despite falling slightly early in the final match. TaySon earned $80K USD and the Axe of Champions, undoubtedly etching his name in the Fortnite history books.

GO Decyptos took second place with 49 points and 11 eliminations. Although he did not win any of the six matches, his elimination points and three top-ten finishes secured him the runner-up position. This finish marks the Frenchman’s second straight impressive performance after winning the Aqua and Nyhrox Cup less than a week ago. Competitive Fortnite fans should keep an eye out for Decyptos in Chapter 2 – Season 4. TDR AyarBaffo rounded out the top three with 47 points, including 13 eliminations and a Victory Royale. This Italian player swung the leaderboard with a clutch win in the final match of the EU FNCS tournament. 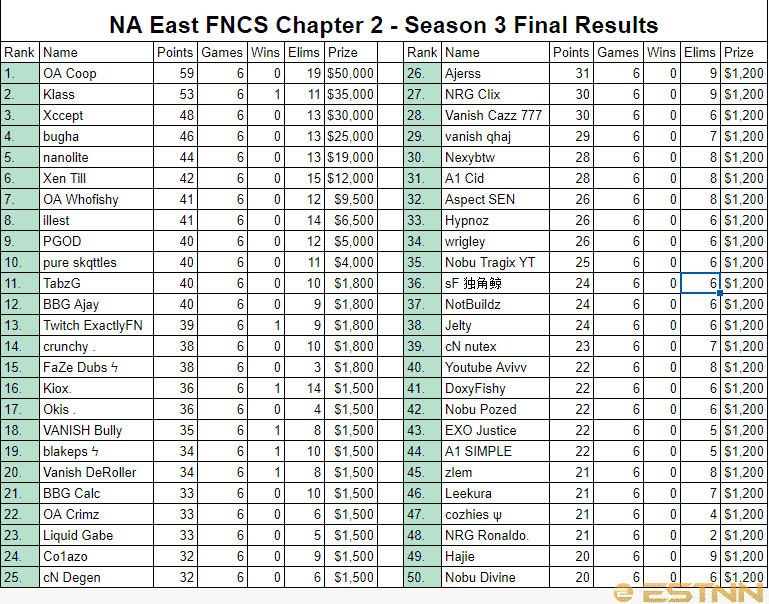 Controller player and Optimal Ambition member Coop earned 59 points and 19 eliminations, which granted him his first FNCS Championship. This three-time FNCS Finalist relied heavily on placement points, achieving placements of 4th, 5th, 11th and 8th in the Grand Finals. However, with a controller in his hand, he compiled the most eliminations of any other finalist over the final six matches. Coop’s performance yielded $50K USD and the Axe of Champions.

Former 100 Thieves Klass produced an exceptional showing the Grand Finals as well. He amassed 53 points with one Victory Royale and 11 eliminations. He won game three with six eliminations, which effectively vaulted him to the top of the leaderboard. Klass will be on the radar of top Fortnite organizations after bagging $35K USD in these FNCS Finals. Xccept finished in third with 48 points. Fortnite Solo World Cup Champion Bugha also impressed with 46 points. He won $25K USD. 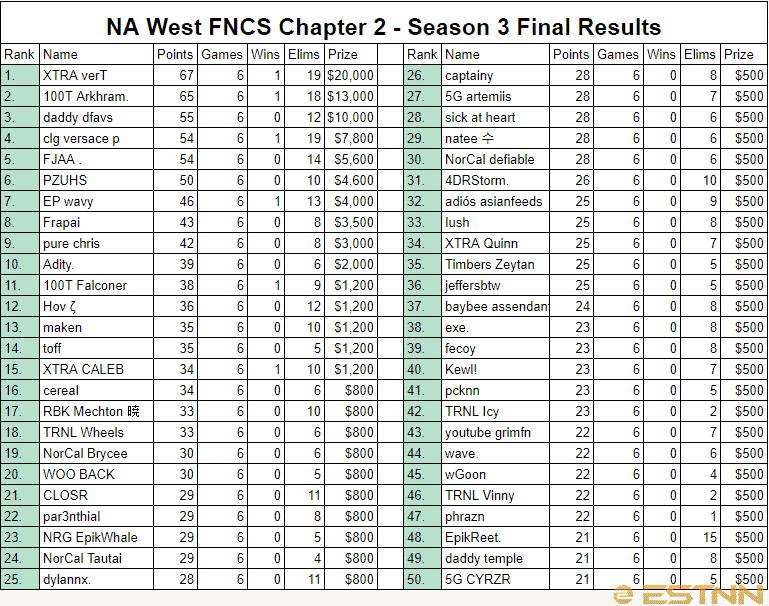 XTRA verT pulled out the upset over the likes of 100T Arkhram and EP wavy in the Grand Finals of NA West. Many of the Fortnite elites will recognize verT for his consistent solo play dating back to DreamHack Anaheim. To round out the FNCS, verT managed 67 points with 19 eliminations and one Victory Royale. He just slightly held off tournament champion and FNCS Invitational winner Arkhram by only two points. VerT’s stock just went up significantly, as did his bank account with another $20K USD in earnings. He will also hold the Axe of Champions until the Fortnite crowns its next champion.

100T Arkhram was nearly on the brink of his second straight FNCS Championship. He earned 65 points across six matches with one Victory Royale and 18 eliminations. The 100 Thieves competitor continues to rise through NA West regardless of the format. He will add $13K USD to his career earnings but will have to relinquish the Axe of Champions to VerT.

Several of the top NA West dogs came out to play as well. 100T Falconer, EP wavy, Frapai, maken, NRG EpikWhale, 4DRStorm and Icy all finished inside the top-50. 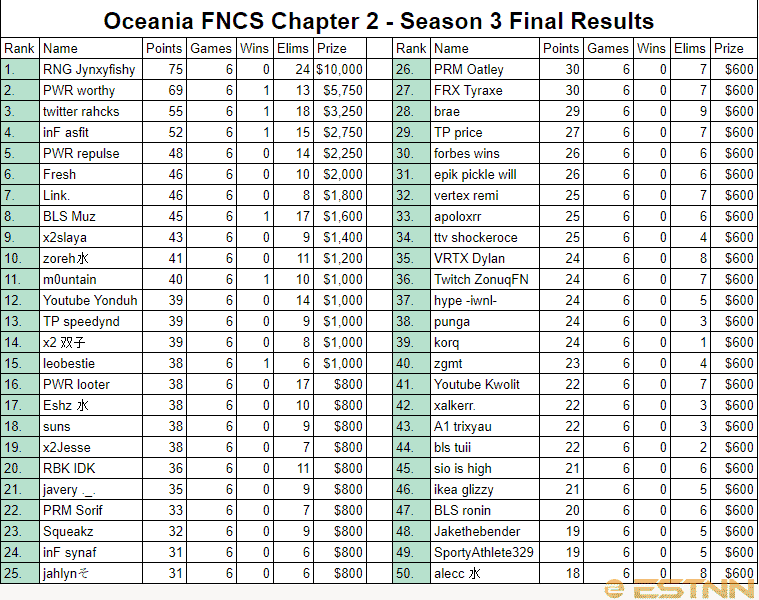 RNG Jynx won his second-ever FNCS Championship in the Oceania region. In the Grand Finals, Jynx earned 75 points with 24 eliminations and no Victory Royales. He played consistently well throughout all six matches, snagging three top-five finishes and nothing lower than 18th place. It was a hard-fought battle for Jynx, who became the first repeat FNCS winner out of OCE after winning back in Chapter 2 – Season 2. He took home the $10K USD grand prize and the Axe of Champions.

Fellow OCE standout PWR worthy fell just short of first place with 69 points in total. He produced 13 eliminations and one Victory Royale. Worthy played consistent as well with no finishes lower than 12th. Unfortunately, he will continue searching for his first FNCS triumph. Some other notables inside the top-50 include Fresh, BLS Muz. Link. PWR looter, Squeakz, jahlyn and Eshz. 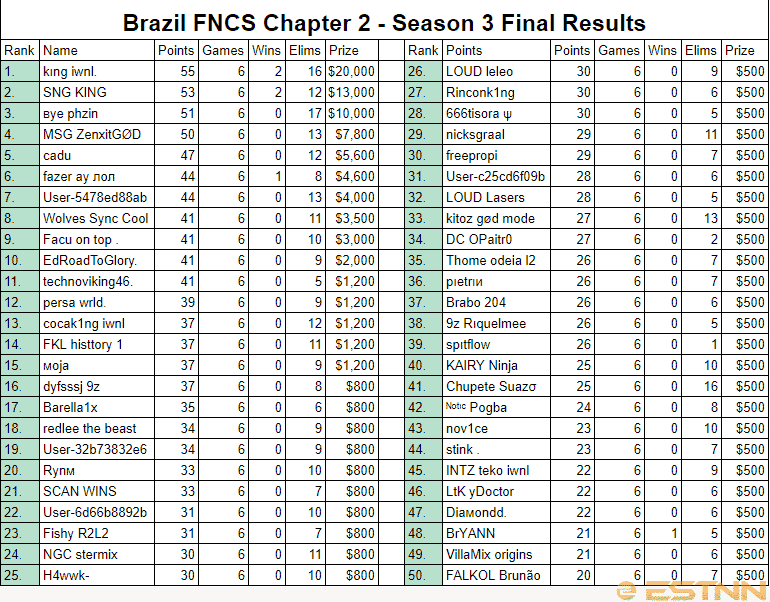 The two kings of the South American region battled back and forth through six intense Fortnite matches. Fortnite World Cup standout king reigned supreme with 55 points and two Victory Royales. Despite not earning any points in the final game, the young Argentinian competitor played his best Fortnite. He proved himself THE king of South America, taking home $20K USD as a result of his efforts.

SNG KING fell just short of the Argentian, but still produce quite a performance. He matched king with two Victory Royales and managed 12 eliminations in the Grand Finals. KING came just two points from victory and was only three eliminations from calling himself the winner. Several top players, including technoviking, leleo, Nicks and Thome all found themselves inside the top-50. 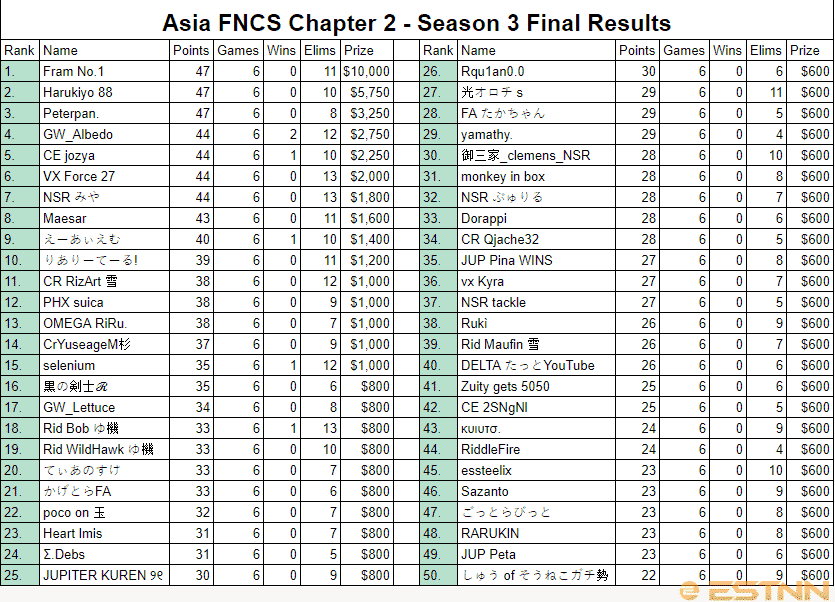 Fram No.1 tied three other players with 47 points, but the tiebreaker went in his favor. His 11 eliminations were the real difference-maker here, seeing that he did not earn a Victory Royale. One measly elimination separated him from runner-up Harukiyo 88. Fortnite World Cup Finalist Peterpan found himself in third place after the tiebreaker, also with 47 points. Fram No.1 bagged $10K USD for his efforts in the Grand Finals for Asia.