On the heels of the first-ever DreamHack Online Open featuring Fortnite, there were some positives and negatives involved in the tournament.

NA East saw Team Liquid’s STRETCH walked away with the victory. Polish player teeq won the European portion of the competition. Overall, it was an entertaining affair for Fortnite fans. Several days removed from the tournament, we have compiled a list of noteworthy takeaways from the inaugural DreamHack Online Open.

Fortnite’s competitive community often overreacts to certain elements introduced with each season. In Chapter 2 – Season 2, Henchmen were a primary point of concern. These non-playable characters (NPCs) spawned at the Agency-themed locations and would attack non-disguised players. It created a cluster when two teams or players were fighting one another. Many clips spawned of competitive Fortnite players falling to insanely precise shots from these Henchmen. It was a significant issue that went uncured throughout the entire season.

Chapter 2 – Season 3 brought something much worse for competitive Fortnite. Marauders are new NPCs that spawn randomly throughout the map and at all points during any given game. Five Marauders generate per capsule with varying amounts of loot, weapons and health. Like Henchmen, Marauders can be either wholly clueless or wildly accurate with their shots. These newly introduced NPCs actively seek out and aggro players without cause.

Marauders create a genuinely unfair circumstance for competitive players. For those engaging a box fight or build battle, Marauders act as the proverbial rain on their parade. Before players even know what hit them, the NPCs bombard them with stink bombs, rockets, hunting rifle shots and submachine gun spray. Marauders take away from the unique aspect of a one-versus-one fight in Fortnite and they have no place in a competitive setting. Loot Sharks are also new to Chapter 2 – Season 3, keeping up with the water theme this season. Again, similar to Marauders, Loot Sharks add to the inherent randomness in the Battle Royale setting. Sharks not only attack players and destroy builds, but they will also gobble up loot in mere seconds. This scenario played out in the DreamHack Open Grand Finals for professional player Clix.

He and fellow finalist Timbers Kodi engaged in a build fight deep in the storm, with Clix triumphing. Kodi’s loot subsequently slid down into the water, seemingly right into the mouth of a Loot Shark. Clix then died to storm damage without having a single chance to heal or rally back out of the predicament. Whether or not the storm fight made sense is not the issue, Loot Sharks should not possess the ability to ruin a professional Fortnite match.

It’s Not Over Until it’s Over

Polish professional Fortnite player Maciej “teeq” Radzio earned the ultimate Victory Royale on the final day of the first-ever DreamHack Online Open. He had been trending upward over the last few months, with a seventh-place finish in the Benjyfishy Cup and 12th in a recent Solo Cash Cup. The former Dyanmind competitor was by no means a favorite heading into the DreamHack Open, especially amongst players like 100T MrSavage, FaZe Mongraal and NRG benjyfishy. However, the presence of such talented competitors did not deter teeq from pushing forward.

Teeq kicked off his DreamHack Open weekend with a sub-par performance in heat one of the open qualifiers. In fact, teeq barely qualified for the semi-finals. He finished just ahead of a player named ‘Navy Boxed You’ with a .12 higher elimination average. It was a minuscule difference that ultimately led teeq to the winner’s circle. After the open qualifiers, teeq took 38th place in the semi-finals thus securing him a spot in the Grand Finals. What transpired over the final eight was a comeback for the ages in competitive Fortnite.

DreamHack Anaheim Champion 100T MrSavage populated the top of the leaderboard early on in the finals. He was one of the favorites from the very beginning. His success under the DreamHack format and the fact that the young Norweigan is one of the world’s best players certainly helped his cause. In reality, MrSavage had every chance and probably should have won the tournament. Despite the lack of a Victory Royale, Savage compiled the most eliminations of any player.

so close to getting back to back :/ needed one more kill. Still really happy with 2nd. well played @teeqFN

Teeq earned 373 points across the final eight matches with 15 eliminations and one Victory Royale. He essentially bested MrSavage by one elimination, which would have ultimately swung the tournament in the Norweigan’s favor. Teeq’s resilience amidst such marquee names speaks to his competitiveness as a Fortnite player. He played extraordinarily consistent and won despite falling early in the final match. Teeq going from barely qualifying to claim victory in a major Fortnite tournament proves that comebacks are always possible.

The Near Perfect Scoring System 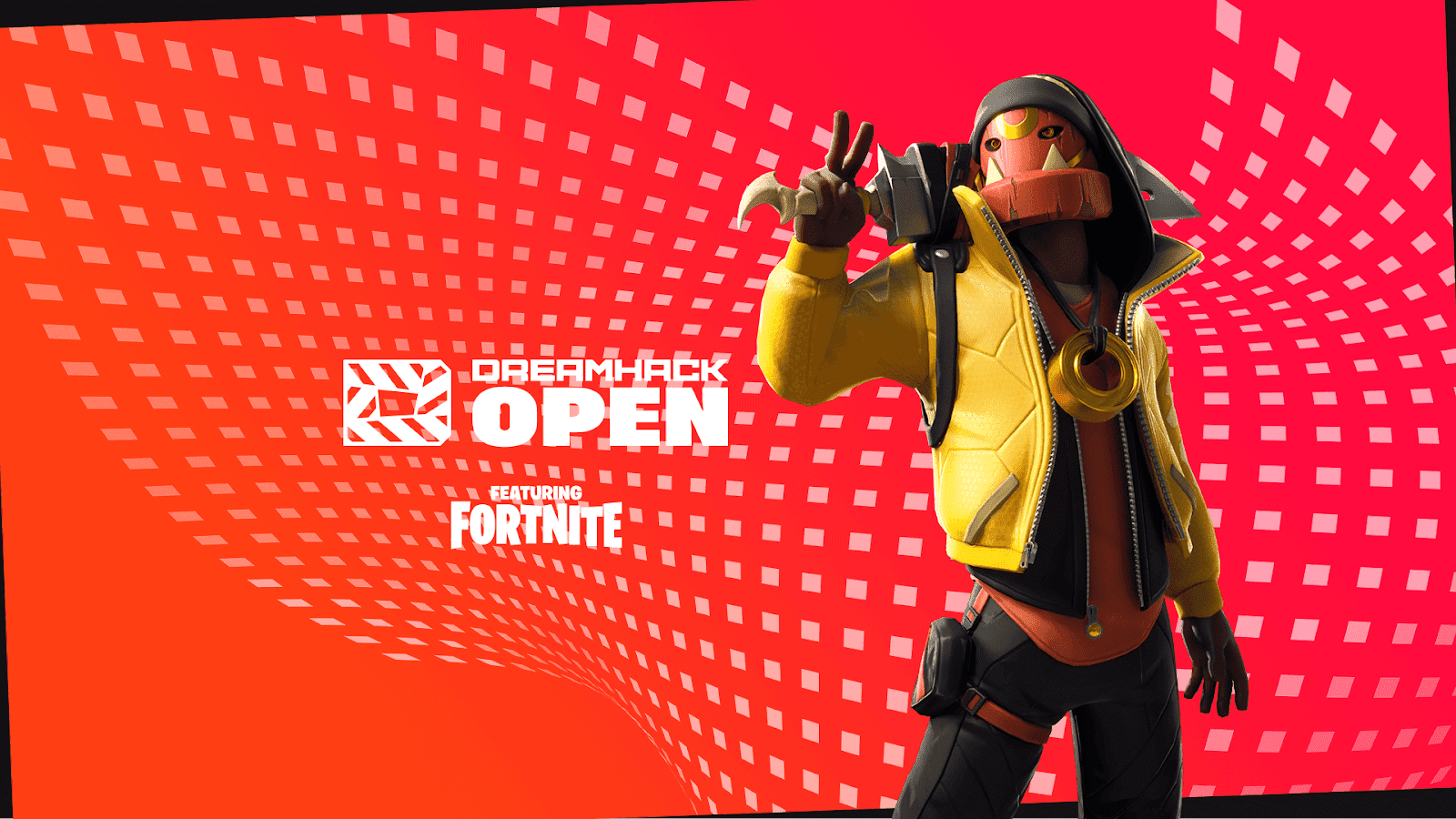 Scoring systems in competitive Fortnite are always a point of contention. Epic Games have just recently started workshopping different systems to balance out elimination and placement points. For w-keyers, eliminations should be worth all of the points. The complete opposite applies to those who’d rather play more passive and avoid risky early-game fights. DreamHack seems to have found a happy medium between both eliminations and placement.

Under the DreamHack scoring system, competitors earn one point per placement after top 50 until the top three. Third place is essentially worth 49 points; second place equals 53 and the Victory Royale awards players a full 60 points. With that placement structure and five points per elimination, we have arguably one of the most reliable scoring systems in Fortnite history. 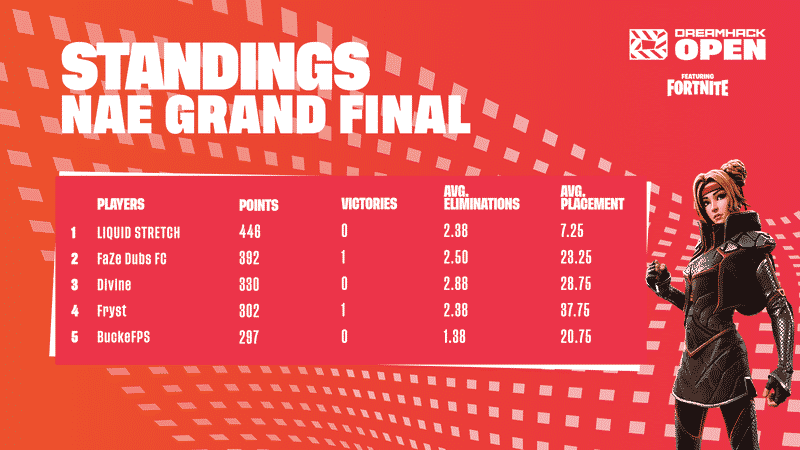 DreamHack’s scoring works well because it rewards both w-keying and placement at the same time. It would take twelve eliminations to equal a Victory Royale under this system, challenging to accomplish in lobbies featuring the best players. Once reaching late-game, placement becomes the focus, and any eliminations are simply gravy on top of any given player’s score. Consistency is the key factory in DreamHack events. It is a near-perfect system outside of how competitors can abuse it in heats.

Open qualifiers, or heats, are unquestionably the easiest part of the DreamHack’s format for talented participants. From a scoring perspective, players can w-key without fear of falling behind the curve. A qualifying spot into the semi-finals only requires one or two high elimination games with some placement. DreamHack’s scoring system could benefit from an elimination cap in heats to enforce smarter play across the board, but it’s still an excellent format and scoring system. Since Chapter 2 Season 1, competitive Fortnite competitions have suffered severe lag issues. Epic Games have put themselves in almost an unwinnable position as a result. The number of tournaments hosted exclusively by Fortnite’s developers continues to rise with each passing season. On the one hand, it’s refreshing to see a developer willing to put up insane prize pools as Epic has since the beginning of competitive Fortnite. However, server performance is something that cannot go without rectification.

“We unfortunately don’t have control over periodic throttling at the ISP level. We do our best to work directly with ISPs any time there are significant issues, but ultimately do not control any changes to internet performance based on the time of day or local demand.”

It’s difficult not to sympathize with the developers. Millions of players queue into Fortnite every week, and they have just as much of an allegiance to casual players as they do to competitive players. However, it’s frustrating to see such inconsistent server performances for multiple seasons in a row. Some lag spikes have more than likely cost players thousands of dollars.

There does not seem to be a clear answer or any resolution in sight. Players continue to take damage through fully placed builds, materials do not set, and occasional game freeze. It’s also the nature of the beast in online tournaments. The intricacies that make format so unique just so happen to be its downfall. Hopefully, Epic Games will figure out these issues in the future to produce genuinely competitive Fortnite matches.