The heavy-hitters came out in droves for the Chipotle Challenger Series. Still, none performed better than FNCS Season 4 and October Chipotle Challenger Series runners-up TSM Commandment, Liquid Cented and NRG Edgey. In a rare occurrence, this lethal NA East combination shattered the 100-point threshold. Their performance included Victory Royales in games one and five on top of a slew of eliminations.

It was slight work for a team that already won $15K USD and a year of free burritos just two months ago. Commandment, Edgey and Cented can add another year of Chipotle goodness and $30K USD to their list of accomplishments.

Chipotle Challenger Series caster Chris Puckett and Arten “Ballatw” Esa scored an interview with Cented following his team’s championship performance. The casters asked how they managed to find so much success. “We had Misty pretty much uncontested, had good loot and were able to fish Rift Fishes in three games, and we were able to play low-ground like normal,” said Cented. “It’s a lot easier this season to play low-ground than it was last season.” Ballatw then asked Cented to explain how low-ground is easier this season. “Well, the Rift Fish creates more layers, and last season you didn’t see as many layers end game,” Cented answered. “So, everyone was forced on to the ground because there was no mobility like Launch Pads or Rift Fish.”

The Battle for Top Three 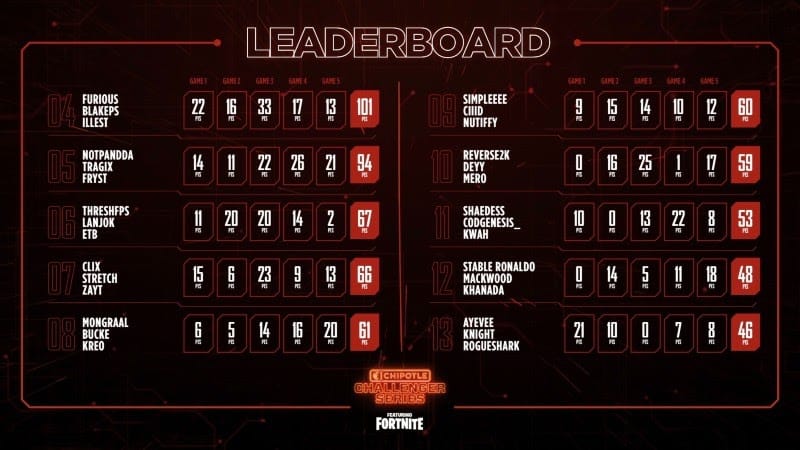 Another NA East trio — Ajerss, Degen and Skqttles — was the closest team Cented’s team, managing a game four Victory Royale before the tournament win slipped away. Ajerss, Degen and Skqttles walked away with $15K USD and a year of burritos. Acorn, Slacks and Jahq — who took fifth in FNCS Season 4 — rounded out the top three. Their lone Victory Royale happened in game two, and they hung around long enough to sneak inside the money and burritos. Acorn’s team earned $5K USD and the same coveted burrito prize.

Congratulations to Commandment, Cented and Edgey on their dominant performance. More competitive Fortnite action rolls on in December with three DreamHack Online Open tournaments and the first-ever Frosty Frenzy.

The best youngsters at the League of Legends 2022 World Championship

Evil Geniuses adapts to the circumstances, overcoming a tough loss