Five Things We Learned About Death Stranding At TGS 2019

After several years of cryptic trailers, it feels strange to be finally getting solid info about Death Stranding. But that’s exactly what happened today at the Tokyo Game Show, as creator Hideo Kojima took the stage at the PlayStation booth to showcase a 50-minute demo that made the structure and flow of the upcoming game much clearer.

After releasing the “Briefing” trailer (above) earlier in the day to provide context, Kojima was able to focus on the details and provide a sense of what Death Stranding will feel like to play. We were right there in the crowd, and though the presentation was in Japanese, these were five things that stood out from what we saw in the footage.

1. Other players impact your world
Okay, so we technically already knew this on a conceptual level, but the demo removes some of the mystery about how Death Stranding forges connects between players. At one point, Sam takes out his ladder to cross a gap. When he returns, he sees a second ladder in a similar location, this one left by another player. You may also find undelivered packages left behind by other people, which you can pick up and add to your own load. While Sam did not encounter these players physically, this evidence of their presence has the potential to give the world a dynamic, unpredictable quality.

2. You want “likes”
When you find a ladder, motorcycle, or other helpful object another player has left, you can “like” it to show your appreciation. We also saw Sam earn some likes though different means, like playing the harmonica to the baby strapped on his chest. However, the incentives on either side of this system aren’t totally clear yet. What is the benefit to having lots of likes? What do players get for taking the time to register their approval? The footage did not dig too deep into those questions. 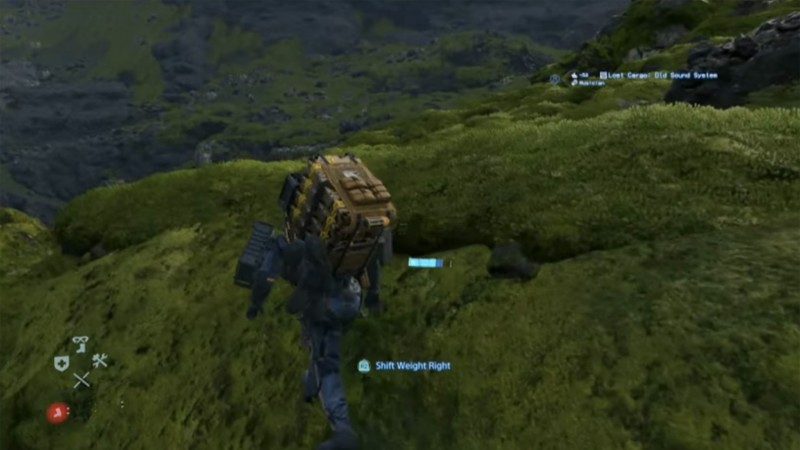 3. Sam has a lot to manage
Players may find themselves taking a more hands-on approach than expected when it comes to Sam’s movement and well-being. Before leaving on a mission, you need to consider how much weight he is carrying, how that weight is distributed on his body, and even wear and tear on equipment. For example, the footage showed Sam ruining a pair of boots beyond repair; fortunately, he thought ahead and brought a couple extras as part of a large haul containing many other packages and tools. However, as a result of this ambitious and unwieldy loadout, Sam was often having to shift his weight as he moved through the environment.

4. It’s a long journey, with lots of stops
Your initial goal is to reach a city on the western coast, but you can’t just run straight there. Sam is charged with rebuilding a “chiral network” along the way, which involves plenty of pit stops and deliveries for people he encounters. You can set waypoints along the path you’d like to travel, giving you an idea of the terrain and challenges you might encounter as you work your way across the country. So players who feared Death Stranding might involve too much aimless wandering needn’t worry; Sam appears to have a clear long-term goal, as well as short-term activities to deal with as the journey progresses.

5. You can ride this thing like a hoverboard!
That’s all you need to know and it looks incredible. (Credit to the official PlayStation Blog for the image. You can read their breakdown of the presentation here).

Death Stranding releases on November 8 on PlayStation 4. For more on the title, check out the previous gameplay reveal from Gamescom a few weeks back.