Someone has snagged the English listing for the game, and more information has been revealed. It will release for PlayStation 4 and PlayStation 5 on February 18, 2021, and pre-order goodies include a “state of the art Discos Locos weapon and a skin for Chorizo.” Chorizo must be one of the Fangs for Hire, and I think that is an excellent name for a scrappy bulldog or boxer dog. The name of the location is Yara, not Yala, and it will also feature an online multiplayer mode.

Far Cry 6 has leaked through the Hong Kong PlayStation Store, and it’s got Breaking Bad’s Giancarlo Esposito smack-bang in the centre of its artwork.

The link to the listing is now gone (oops), but screenshots are forever. Here’s the artwork and the translated description of the game: 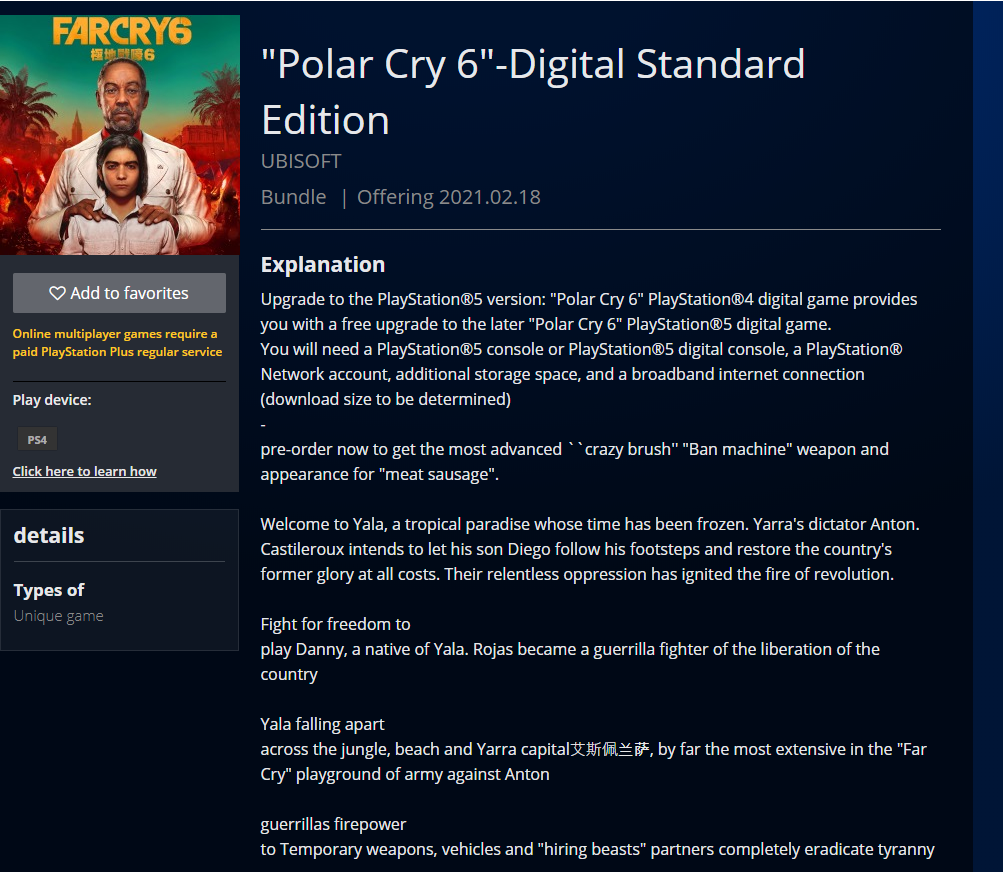 It appears that claims of a more “exotic” location compared to the rolling hills of Hope County were on the money. “Welcome to Yala, a tropical paradise whose time has been frozen,” reads the description. Anton Castileroux, presumably played by Giancarlo Esposito, wants to restore the former glory of Yala, and he intends to train his young son Diego in his footsteps. The player will take on the role of a rebel fighter for the liberation of Yala, and this character is named Danny Rojas.

We don’t know much more than that, but it does mention “hiring beasts,” as well as city, beach, and jungle environments. It would be a return to the roots of the series, though Far Cry 5 and Far Cry New Dawn offered interesting twists in North America. In addition, the description claims that Far Cry 6 will offer the “most extensive playground” of any Far Cry title to date. Whether it’s also coming to the next generation of consoles is not known.

If this listing is authentic, we would assume that the game will be shown off in Ubisoft Forward on Sunday. Giancarlo Esposito has been rumoured to be attached to the next Far Cry game, and earlier reports stated that the next installment would be presented in the company’s own showcase. We’ll keep you in the loop!

I just wanted Warzone IS THAT TOO MUCH TO ASK.

A Nintendo Direct might be set for July 20, claims report

A Nintendo Direct might be set for July 20, claims report