I’m hugely excited to speak to you today about Little Hope, the latest game in The Dark Pictures Anthology. We are delighted that the game launched on Xbox just in time for Halloween and have been really happy with the reaction so far. As you know we make horror games, so having a game launch around Halloween was our idea of a perfect launch day!

In case you didn’t know The Dark Pictures Anthology is a series of intense, standalone, branching cinematic horror games. Each game is playable in single-player or in two multiplayer modes – two-player online Shared Story mode and up to 5 player couch co-op Movie Night mode. As in all the games, everyone can live and everyone can die. It’s all up to you!

We’ve been delighted with the response we’ve had to Man of Medan, the first game in the anthology, which was released in 2019. It was especially exciting to hear from the Xbox community as this was the first time one of our games appeared on your platform. It was also fantastic to see Man of Medan become available on Xbox Game Pass earlier this year!

All of the games in The Dark Pictures Anthology are separate standalone stories, and Little Hope is very different to Man of Medan. Last time you had to explore the tight and claustrophobic corridors of a terrifying ghost ship. This time the environment is much more open as you explore the seemingly abandoned town of Little Hope. But don’t get too relaxed – Little Hope is not all that is seems. Something wicked this way comes!

I don’t want to give the story away, but here are the basics for you. Abandoned and all alone after their bus crashes in bad weather, four college students and their teacher become stranded in the isolated town of Little Hope. Trapped by a mysterious fog, they search desperately for a means of escape whilst terrifying visions from the past haunt them from the shadows. After bearing witness to the town’s gruesome past, and the terrible events of the 17th Century Witch trials, hellish beings pursue them relentlessly. They must figure out the motivation of these apparitions before the evil forces at work drags each of their souls to hell. Good luck!

Let me introduce you to characters of Little Hope. First up is Andrew, played by the supremely talented Will Poulter. His character is a little shy, a little within himself, but quickly has to get to grips with his situation. Then there is Angela, a more mature student. She is petty dominant and can be bossy, but she is tough and forthright. Daniel may initially seem a little cocky, but he’s actually pretty laidback and seems to be mostly interested in impressing his fellow classmate Taylor. Taylor is a strong personality, passionate and opinionated. Finally there is John, the class Professor who lectures in creative writing. He’s counting the days to his retirement and certainly wasn’t expecting to lead a group of his students through a terrifying abandoned town looking for a means of escape!

However, all these character traits are definitely not set in stone – the choices you make in the game will directly affect the way they all behave with each other and ultimately how the story plays out.

So, as well as the story, setting and cast we’ve been focussing on some new features based on feedback from the Dark Pictures community. For example, the team have included context sensitive icons for interacting with objects in the world and QTE alerts that tell players when one is coming and the action they need to perform. We’ve also added a 360 degree camera in some parts of the game to allow you to fully control your view of the spooky surroundings and explore your environment in much greater detail.

So, there you go. I hope you’ve enjoyed this introduction. We can’t wait for you to enter the town of Little Hope which is available now on Xbox!

…and before you go, one last thing. If you playthrough the entire game you may just get a little teaser video of the next game. This is called House of Ashes and will be very different to Man of Medan and Little Hope. The third game in the Anthology takes you to Iraq and the Zagros mountains, where something terrible awaits underground…. don’t play alone! 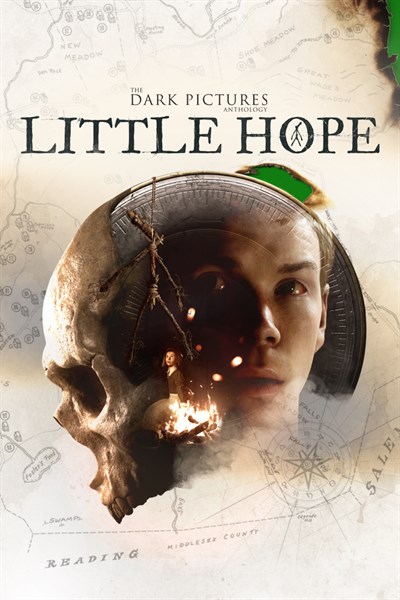 4 college students and their professor become stranded in the abandoned town of Little Hope. Trapped by an impenetrable fog they try desperately to escape whilst witnessing terrifying visions from the past. They must figure out the motivation of these apparitions before the evil forces at work drags each of their souls to hell.

Witness terrifying visions of the past, haunted by the events of the XVIIth century Andover Witch Trials

Escape the hideous apparitions that relentlessly pursue them through the fog!

Play online with a friend or up to 5 friends offline,
Abandon Hope…all who enter here!