When I first got my hands on the ErgoDox EZ Shine ergonomic keyboard, I was confronted with three things. First, the ErgoDox EZ is one absolutely gorgeous keyboard. Second, my touch typing technique is utter garbage and in desperate need of a refresh. And third, this unique keyboard might just be a PC gamer’s new best friend.

The ErgoDox EZ isn’t like most keyboards. It’s the product of an Indiegogo campaign from back in 2015, in which company CEO Erez Zukerman and his team managed to breeze past the project goal, and allowing them to get to work on their take of this much-loved design.

This non-traditional layout throws out the commonalities found between most keyboards. Instead, it champions an ergonomic, ortholinear design, split across two separate boards – one for either hand. This means the keys have been shuffled around into a straight vertical line, all of them within easy reach of your nimble digits, and you’re free to change up the distance between each discrete half of the board for complete comfort.

Because the core concept and design of an ErgoDox is completely open-source, if you wanted to build your own entirely from scratch, you could. You’d need to pick up the blueprints, a PCB, USB board, switches, keycaps, a case, legs, a couple cables, a soldering iron to fuse it all together, and a whole lot more… but you get the point.

The building process actually sounds enjoyable if you are partial to a little DIY. But, instead, you could pick up an ErgoDox EZ Shine for $299 standalone, or $355 with all the goodies, and be done with it. While that price is pretty steep – economies of scale and all that – Zukerman assures me it’s because the company doesn’t cut corners, uses premium materials, and pays its Taiwanese staff a fair wage.

In return, you get all the necessary parts listed above from the likes of Cherry, Kailh, and Signature Plastics – who are some of the best in the biz. The wrist rests, tilt/tent kit (little adjustable legs), and RGB LED lighting on the rear of the unit all come as added extras with the top-tier kit. The wrist rests and tilt/tent kit are necessities for an ergonomic keyboard, and definitely worth the investment if you aren’t providing your own. The RGB lighting, on the other hand, well, that’s just a straight-up necessity for life.

But let’s move onto the experience. At first, I found myself poking around the EZ’s keys with only my index fingers. Luckily, that flashback to my early years of learning to type on a big beige box in school was short-lived (fun fact: that PC later burst into flames of its own volition), and I soon got to grips with the new layout.

But gaming is a whole different story. Personal setbacks aside, the ErgoDox makes for a marvellous gaming keyboard. It’s all thanks to the underlying principles that are crucial to its design: the ErgoDox EZ is built to give you absolute control of your setup.

The commodious PCB design allows you to swap switches at a moment’s notice. While I opted for a board fitted with the clickiest Kailh switches I could get my hands on (Thick Gold), I also grabbed a bag of 20 Cherry MX Speed Silver switches. These switches are tailor-made for gaming with a speedier than usual actuation. After only a couple of minutes fiddling with the included switcher tool, my WASD keys were raring to go with Cherry’s finest gaming linears.

But it’s not just the hardware that’s conducive to great gaming performance. An online graphical configurator allows you to remap the entire keyboard with any number of key combinations and macros for your most ideal layout. In total, there are 32 programmable layers: all accessible through various shortcuts of your own making. Want a custom layer for Destiny 2, one for PlayerUnknown’s Battlegrounds, and another for Total War: Warhammer 2? Easy. Just set up your layout online, download the file, and flash the keyboard through the provided tool.

This is incredibly useful for when you want to ditch the right pad entirely – which I found myself doing frequently. You can remap a layer to swap every key you need for any given title onto the left pad at the press of a button. This allows you to free up a ton of desk space for greater manoeuvrability with your mouse, especially suited for gamers who favour low DPI settings, and helps cultivate better posture, too. 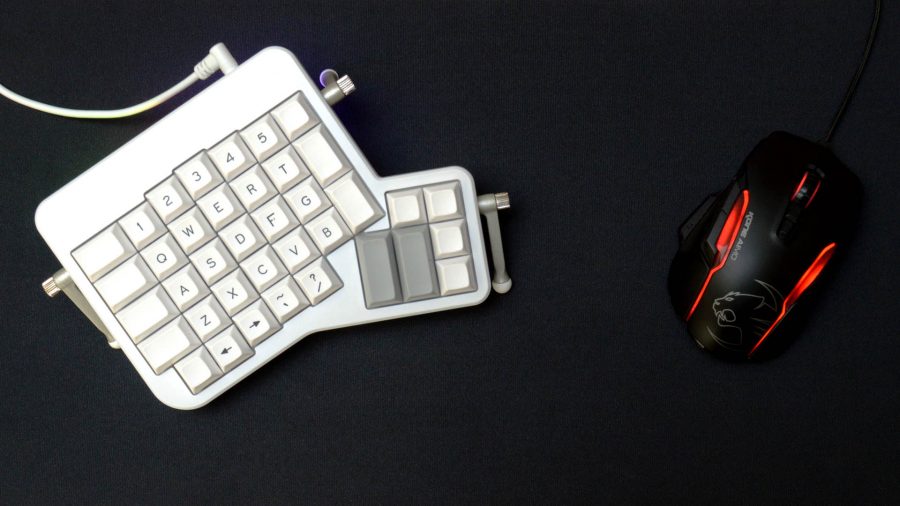 Which brings us onto ergonomics. As you might expect from the ErgoDox, the keyboard is remarkably comfortable. The Wing wrist rests offer a much more generous profile than most slimline rests included with gaming keyboards. Even the lavish rests from Razer and Logitech can’t hold a candle to the soft-touch contoured wing rests up for grabs with the EZ.

After nearly three weeks testing the EZ, I feel I’ve barely scratched the surface of its potential

It’s not just the rests that keep the doctors away, however. The tilt/tent kit opens up a whole new dimension to you. Whether you prefer a serious incline or just a little extra height, the adjustment can make a huge difference to your posture and comfort. After a stint on the EZ, returning to a standard keyboard with just two little adjustable feet, feels nigh on barbaric.

The ErgoDox still rocks a cluster of thumb keys, however, which is something many other ergonomic designs have ditched in favour of a single bottom row. But, despite the stretch to reach some of the thumb keys, the abundance of switches is great for those of us who are less accustomed to macros, shortcuts, and layers that other ergo boards utilise in lieu of physical keys.

So while it has taken me far longer than I’d like to admit to get used to a split ergonomic design, I’m definitely going to stick with it post-review. After nearly three weeks testing the EZ, I feel I’ve barely scratched the surface of its potential. Whether that’s through the configurator, firmware, switches, keycaps, height, angle, or even the Hyper and Meh keys that I only now realise aren’t just throwbacks to the days of MSN messenger.

Ergonomic keyboards are almost all but ignored in the gaming world. These are niche designs after all, and the learning curve is far from everyone’s cup of tea – especially when you may have to pay considerably for the privilege. But as the ErgoDox EZ competently proves, alongside a spattering of others, ergonomic keyboards that tear the rulebook in two deserve a little more love in the gaming sphere – not just because they are great at gaming, but because they are great at everything.

This passion project proves that when ergonomic keyboards are done right, they’re not just comfortable, they are conducive to high-tier gaming, too.