Epic Games vs. Apple escalates into a legal situation.

After Epic Games attempted to finagle Apple’s 30% collection fee on in-app purchases, the two companies are now at each other’s throats. The story began earlier today when the Fortnite developers issued a Mega Drop, which granted players a 20% discount on Fortnite’s in-game currency purchases, also known as V-Bucks. In the process, Epic Games introduced a direct payment option on all Apple iOS and Android devices.

Epic’s direct payment option worked as an opportunity for the company to avoid the 30% collection fee that both Apple and Google utilize for in-app purchases. Those who chose the direct payment option would receive the full 20% discount as part of the previously mentioned Mega Drop promotion. Google stayed silent, but Apple reacted with a swift shutdown of Fortnite on all iOS devices.

Epic Games responded quickly to Apple, essentially blacklisting Fortnite, which has generated well over $1 billion since its release in 2017. The North Carolina-based developer released a blog post, addressing Apple’s decision to remove Fortnite from the App Store.

“Apple has blocked Fortnite from the App Store, removing everyone’s ability to install and update the game on iOS devices, while instructing Epic to “remove the ‘Epic direct payment’ feature”. Apple is keeping prices high so they can collect 30% of your payments, and is blocking Fortnite in order to prevent Epic from passing on the savings from direct payments to you! Join the fight against @AppStore on social media with #FreeFortnite.”

In the process of combatting Apple’s actions, Epic Games has filed legal papers. Additionally, the Fortnite developers urge Fortnite fans to battle back against Apple with the hashtag #FreeFortnite on all social media platforms.

It did not take long for Epic Games to compose a campaign that directly targets Apple with a not so subtle reference to George Orwell’s 1984.

The video depicts an Apple-themed character on a video screen campaigning to a group of seemingly brain-washed Fortnite characters. Another character enters the room and throws a pick-ax at the video screen, exploding it into pieces. Some text then flashes across the screen. 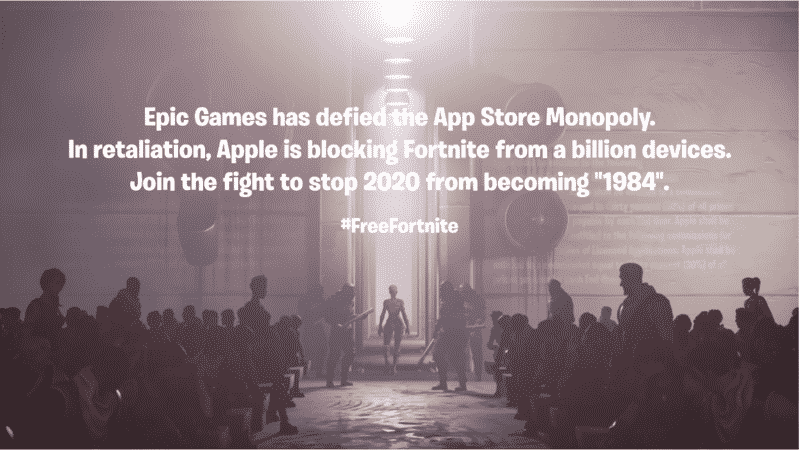 What Does This All Mean?

As of right now, Apple iOS device users can no longer download Fortnite or update their existing Fortnite application. Apple released a statement to The Verge, which addresses the ongoing discrepancy with Epic Games:

“Today, Epic Games took the unfortunate step of violating the App Store guidelines that are applied equally to every developer and designed to keep the store safe for our users. As a result, their Fortnite app has been removed from the store. Epic enabled a feature in its app which was not reviewed or approved by Apple, and they did so with the express intent of violating the App Store guidelines regarding in-app payments that apply to every developer who sells digital goods or services.

Epic has had apps on the App Store for a decade, and have benefited from the App Store ecosystem – including its tools, testing, and distribution that Apple provides to all developers. They agreed to the App Store terms and guidelines freely and we’re glad they’ve built such a successful business on the App Store. The fact that their business interests now lead them to push for a special arrangement does not change the fact that these guidelines create a level playing field for all developers and make the store safe for all users. We will make every effort to work with Epic to resolve these violations so they can return Fortnite to the App Store.”

There are certainly levels to the dispute between Apple and Epic Games. Both companies seem content with standing their ground. Only time will tell how the legal proceedings will play out.

Stay tuned to ESTNN for more information on this developing story.

Recently, three popular streamers – Ninja, Shroud and Dr Disrespect – have returned to live streaming. Viewer favorites have managed to pull back a huge number of fans in front of their screens, although the results of one may come as a surprise.