CES. A trade show unlike any other. Spread across a carnival of casinos and malls the size of small Italian cities, anyone brave enough to tread this expansive tech wilderness understands how valuable a plug socket or short break can be to restoring your mind, body, and laptop battery. Yet this year, unlike any show before it, I didn’t mind the long days traipsing between appointments – and that’s all thanks to the Dell XPS 13 2-in-1.

When you leave your hotel at a trade show you rarely ever come back until you’re done for the day. There are few occasions where you’ll find yourself relying on the whims of an organisation or architect to provide an abundance of plug sockets at regular intervals, offering a brief moment of solace to sit and charge your laptop as you work on your next story. A single socket every Starbucks won’t do when over 100,000 people descend upon its coffee-stained carpets ready to slip into an over-caffeinated daze in time for business.

I skipped all that in 2020. Most of it, anyways. A few days in and I was on the lookout for a nice quiet square foot or two of nylon I could perch upon, but never was a plug socket of any consideration. That’s purely because I chose that same week to wear in a brand new pair of Dr. Martens. A rookie error.

That’s the power of Project Athena – a set of stringent specifications and measures devised and moderated by Intel in order to enable thin-and-light devices that are built around real people and real needs. I know “real-world performance” is a bit of a catchphrase/meme over at Intel nowadays, but, damn, if Project Athena doesn’t prove a point.

At the core of the Project Athena specification are six key performance metrics:

Embodying that Project Athena attitude is Dell’s XPS 13 7390 2-in-1. The XPS lineup of laptops is something I’m well-versed in, and I’ve plenty of experience with the old-fashioned ‘doesn’t-flip-all-the-way-around-unless-you’ve-sat-on-it’ XPS 13 from some five years back during its service as my daily device. Yet it’s the abundance of changes introduced with the 2019 XPS, in conjunction with Project Athena, that I’ve been mightily impressed with.

The Dell XPS 13 2-in-1 is a mighty tool for anyone joining in on the travelling tech circus year-after-year. It weights next-to-nothing, its battery life is exceptional, and the quality of components ensures you won’t feel constrained or fatigued by its slim 13-inch shell.

While these compact devices have all managed to hook me with just how many working hours they manage to offer in such a slim design, the battery in-excess of ten hours touted by the XPS 2-in-1 is unparalleled by my own experience. In our Heaven benchmark – only made possible by the Intel Ice Lake Core i7 1065G7 at the XPS’ core – the XPS managed to keep a grip on life for one hour and 58 minutes. While it cannot hold a candle to the performance of gaming laptops three- maybe four-times its size, that’s a commendable time for a device so exponentially slight in stature. 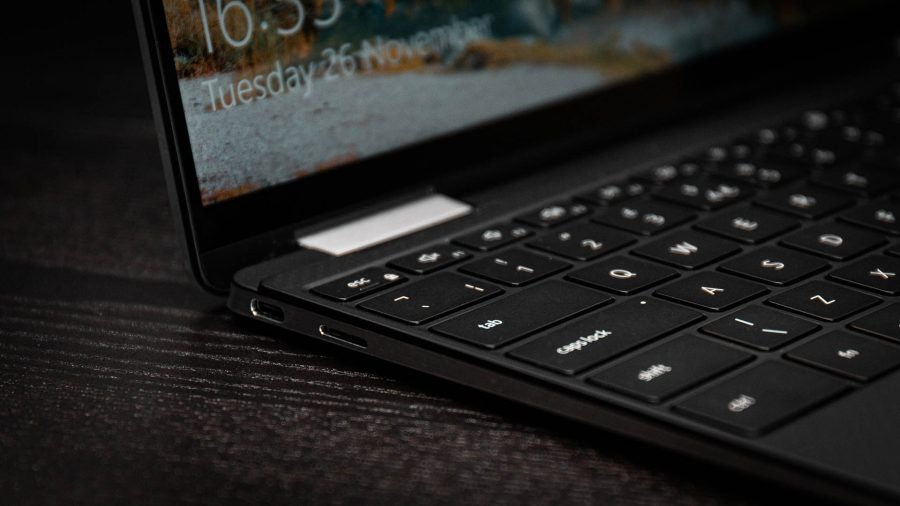 It’s roughly 20 minutes off the pace of the Razer Blade Stealth – similarly fitted with an Intel Ice Lake Core i7 1065G7. Where the two differ, however, is in use of Intel’s cTDP. While the Razer Blade is rated to 25W, the Dell XPS 13 is constrained to a 15W TDP.

Yet the disparity between the two in overall performance is not what I had expected. While both offer Intel Iris Plus graphics (Gen 11 and precursor to Intel Xe with Intel Tiger Lake), the 10-watt limiter attached to the undercarriage of the XPS has been shown to have little impact on gaming and benchmark performance.

Neither thin-and-lights excel in-game – even Iris Plus Graphics aren’t yet cut out for 1080p gaming in anything but the least demanding games. Yet as the decisively slimmer device, one that weighs only 1.33kg to the Blade’s 1.36kg, Dell’s thermal engineering is evidently nothing short of a rousing success.

There is an inflection point, however, when the innards of this slender unit fails to keep a lid on the temperature. During x264 benchmarking, that was around the final few runs, but that’s likely not representative of the workload you’ll be throwing at this mini rig.

When one is so used to lumbering gaming laptops, it’s easy to become panicked as you leave an event with your bag feeling light and… empty. In that moment believing that the laptop that you took to Vegas (and don’t own), might stay in Vegas. Left somewhere to be gobbled up by a swarm of (probably lovely but it only takes one) show attendees, to then swiftly realise it’s actually safe and sound next to your half-eaten plain bagel and teeny tiny complimentary bottle of water.

But form factor demands sacrifice, and it’s Dell’s keyboard that has been sliced and diced in order to shrink its frame down so far. Unfortunately, the resulting keyboard, while backlit and well laid-out, has an incredibly short travel distance. At its best, it’s rather satisfying to clack away at. At its worst, the Dell XPS 13 2-in-1 is a minefield for mistyping and frustrating erroneous keystrokes.

It’s easy to forgive this one slight – you’ll swiftly adjust to the typing experience and make do – and I’m willing to look over the limited twin USB Type-C ports and headphone jack due to the existence of said headphone jack. It’s a saving-grace when you’re tethered into a USB Type-C monitor and in need of all the ports you can get. The Dell Thunderbolt dock may be a valuable investment if you’re anything but a minimalist.

The memory and SSD are also soldered firm to the motherboard, so ensure you’ve chosen wisely and planned for the long-haul before placing an order.

At £1,699 for this spec ($1,750 for the 32GB model in the US), this device is a little pricier than the Blade Stealth, and there are cheaper Project Athena models available. No doubt many of the feature improvements included with the Dell XPS 7390 2-in-1 are a shared attribute across devices within the Project Athena 1.0 specification lineup, too – Intel’s running three labs across the globe to ensure as much.

Yet when the XPS delivers so much in a compact package, and with an assurance of overall quality and performance on par with far bulkier kit, it’s clear why so many favour Dell for portable ultrabook performance.

The Dell XPS 13 2-in-1 was my fleeting taste of the good life – where all of the latest technologies and standards converged into a single product, operating as Silicon Valley envisioned.