CrossfireX Preview – How Remedy Is Tackling The Military Shooter Genre

While it may not be a household name in the West, Smilegate’s CrossFire is one of the most-played video games of all time, amassing more than 1 billion players across 80 countries. As a free-to-play military shooter, CrossFire has enjoyed nearly unrivaled popularity in Asia, grossing over $10 billion in lifetime revenue. With impressive numbers like that in tow, Smilegate is not only hoping to finally expand to become more popular in the West, but also conquer the console market with an Xbox version called CrossfireX.

This version brings the shooter to the console market for the first time, but Smilegate and Xbox Game Studios didn’t stop there: The team also brought in Remedy Entertainment, the studio behind such titles as Alan Wake, Quantum Break, Max Payne, and Game Informer‘s 2019 Game of the Year, Control, to work on two all-new mini-campaigns called Operations. I caught up with the team from Remedy to not only get an glimpse of the action, but also learn how the studio is bringing its distinct flavor to the military first-person shooter genre.

Games developed by Remedy Entertainment are often defined by unique narrative twists and strange phenomena. Because of that, the military first-person shooter genre may seem like a strange fit for the studio, but the team is determined to bring its own brand of in-your-face shooter action to the new campaigns of Smilegate’s wildly successful shooter.

Despite seeming like a unique choice for the genre, Remedy executive producer Tuukka Taipalvesi says Remedy was the exact kind of studio developer Smilegate was looking for due to the team’s world-building capabilities. “For over a decade, they have been building this world of CrossFire through multiplayer modes, multiplayer maps, and information that they shared with the players before they jump into multiplayer,” he says. “We needed to do some data archaeology and start to make sense of the actual world timeline and build that from the ground up.” 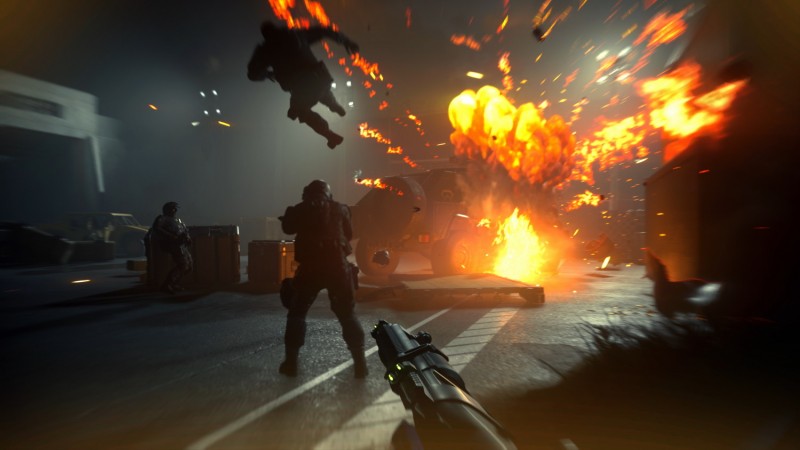 The resulting story explores the history and conflict between the two warring factions, Black List and Global Risk. Remedy’s mission was to not only build up the world and adequately lay out the timeline of events, but to also add depth and recognizable characters to the story.

The gameplay footage puts the player in the shoes of Luis Torres. In the opening cutscene, Torres is riding in the back of a prison bus, handcuffed. He doesn’t know it yet, but he’s being sought after by both Black List and Global Risk. As Torres banters back and forth with the guard, a drone stealthily flies under the bus and explodes, flipping the bus. As what appear to be assassins approach the bus, Torres is able to pick the lock and flee to a nearby hospital. 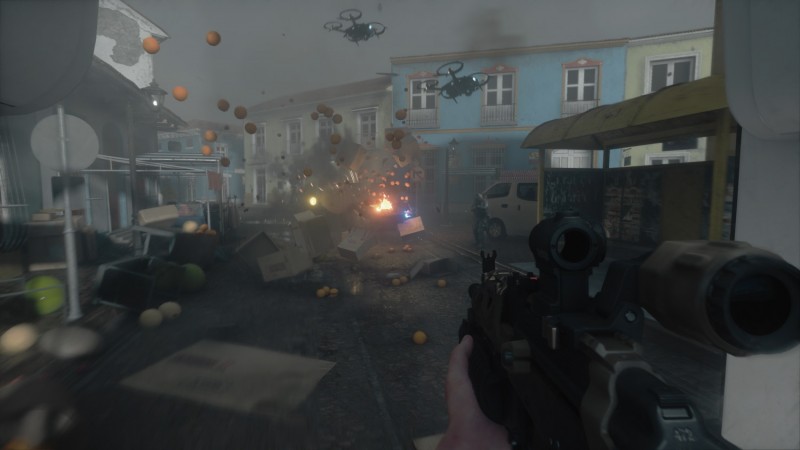 Torres enters the hospital, but it’s a ghost town; the televisions in the waiting rooms indicate that an incoming hurricane has triggered an evacuation. He continues through the empty hospital when he’s jumped by a Global Risk operative. After a short struggle, Torres is saved by Specialist Nicholas Kamara, a Black List operative attempting to extract Torres. Unfortunately for Torres and Kamara, Global Risk now knows where they are, and the shootout begins.

As Torres and Kamara shoot their way through the hospital and its waves of encroaching Global Risk operatives, an alert pops on the screen saying the Combat Breaker is ready. With a press of RB, Torres is able to slow time – much like the bullet-time feature Remedy famously implemented in Max Payne – to target specific enemies and environmental objects. In this situation, Torres blasts an explosive next to a group of unsuspecting Global Risk operatives. 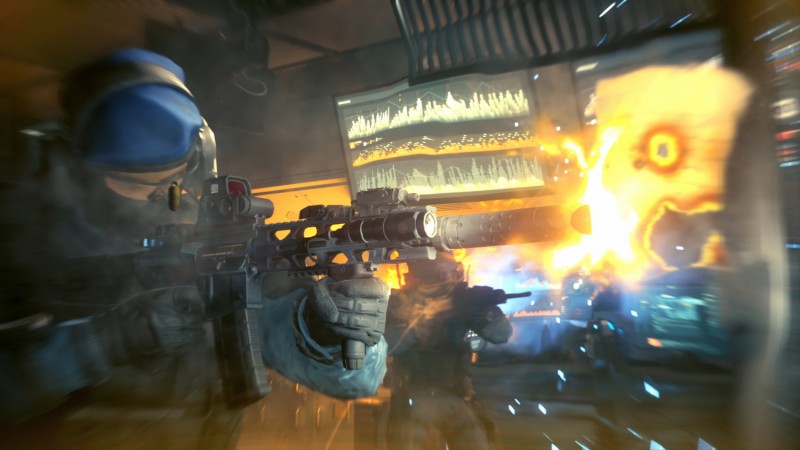 The two begin making their way to the rooftop to catch a helicopter ride out of the swarmed building, but as they get close, an enemy jet fires a rocket into the room the two are in, knocking Torres unconscious. When he comes to, Kamara is gone, and Torres has fallen into the sewers. When he emerges from the subterranean labyrinth, he’s greeted by two Black List operatives: Logan and Cora. Together, they hop into a vacant ambulance to make their escape, but it won’t be easy with Global Risk hot on their tails.

The sequence results in an on-rails shooting sequence, requiring Torres to blast soldiers on rooftops and in the streets, as well as military vehicles and drones. The scene culminates with a heavily armored truck ramming into the van; Torres’ bullets are no match for this combat-ready vehicle. Thinking fast, Cora throws an oxygen tank into the grill of the truck and Torres ignites it with a shot of his rifle. The chase may be over, but the action is just beginning as the ambulance veers off the road and into the sea below. 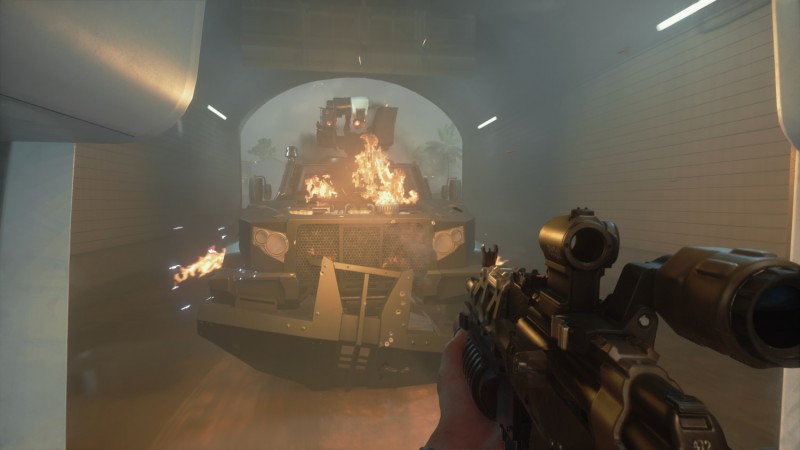 While things get chaotic in this sequence, this is just the tip of the iceberg. “There is some crazier stuff, definitely, in the Operation, but like every Remedy game, it’s rooted in reality – whether it’s Max Payne, Alan Wake – and then we have that layer of fantastic that comes on top, so there is definitely that in CrossfireX,” says Remedy head of communications, Thomas Puha.

Remedy may be developing these Operations as a single-player component of the title, but Smilegate’s multiplayer is still a major focus of the game. According to Remedy, the studio is creating two Operations, with each one taking three to four hours complete, depending on difficulty and thoroughness with collectible-hunting. 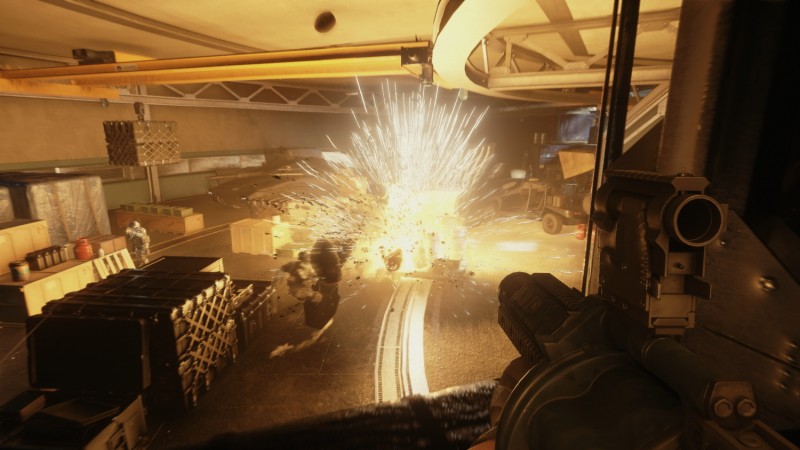 As one of the most-played games of all time, CrossFire has already proven its viability in Asian markets. With an all-new campaign by a beloved studio in tow, as well as an updated version of the multiplayer that made the series a nearly unrivaled phenomenon in many parts of the world, Smilegate is hoping this is how it finally makes a big splash in the rest of the planet.

CrossfireX hits Xbox Series X and Xbox One this year.