Buy this today: Tyrants of the Underdark

D&D’s iconic world of Faerun is filled with wonders from north to south. Dragons, dungeons, heroes going on valiant quests… boring stuff, really. Everyone who’s anyone knows that the real fun happens underground, in the ‘Underdark’ – a vast network of caverns and caves occupied by Drow, slightly grumpier dwarves, and other shady (if not downright evil) denizens. This deck-building game sees four of you compete for control over this underworld, and features some excellent twists that make it all the more enjoyable.

Today’s recommendation is brought to you by Strategy Gamer & Wargamer – two of our sister websites run by Joe (that’s me!) that between them cover just about everything from mainstream strategy to hardcore wargames, digital to tabletop. Tyrants of the Underdark was created by Gale Force Nine in conjunction with Wizards of the Coast.

First and foremost, Tyrants of the Underdark is a deck-building game. If you’ve ever played anything like Dominion, or any of Cryptozoic’s lines of DC/Lord of the Rings deck-builders, then you’ll know what to expect. There’s a central market deck, but the players start with a very basic beginner deck. You must buy cards from the market to make your deck better and more efficient, although what you use that deck for really depends on the game you’re playing.

Tyrants of the Underdark starts with this tried and true premise, but adds in something wonderful – a physical board. See, you’re not just buying and playing cards; you’re also fighting for physical, literal control over the underdark, via said board. It comes with playing pieces and everything. Up to four players compete on this map and they not only need to improve their deck by buying cards; they must also use their deck to place physical pieces on the map and eliminate their opponents.

Everyone starts at a single point, and they must expand slowly across the map’s nodes, taking over major population centers. Infamous locations such as Menzoberranzan or Skullport can form the crown jewels of your underworld empire, and you must defend them at all costs.

It’s probably one of the most enjoyable deck-building games I’ve ever played. It even holds up pretty well as a two-player game – the map scales depending on how many players you have, and with the addition of neutral pieces it presents a fairly balanced game throughout. There are also plenty of different ways to approach the question of victory. Even though there’s only one way to win – collecting victory points – there’s a couple of different means of claiming these, and there’s a decent variety of card combos to pursue.

Also, it’s just really fun to be bad for a change. Every game you decide which two ‘half’ decks to use to create, and the base game comes with four: drow, dragons, elementals, and demons. These are not good people, and in your quest for dominance you will not be doing noble things. It’s fantastic.

The base set for Tyrants of the Underdark has been out for a while but is still readily available from places like Amazon, so it shouldn’t be too hard to pick up.

Tyrants of the Underdark is the base game, and comes with the board, playing pieces, cards, and everything you need to get started fighting for control of the underdark. 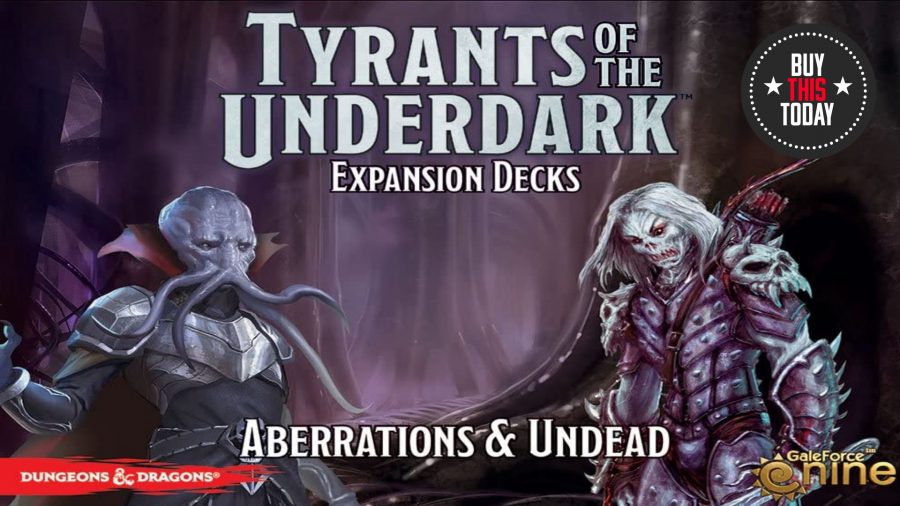 To date, there has only been one expansion – Tyrants of the Underdark: Aberrations & Undead. It introduces two new half-decks (bringing the total up to six), themed around zombies and skeletons, as well as beholders (the classic D&D monster that is a giant floating eyeball) and Nothics. Each new half-deck can combo with the other, as well as any in the base game. This expansion is also available via Amazon.