Blast Your Way to the Top in Rocket Arena Season 1

The youngest ever student at Propulsion Prep, Flux is a science genius and serious cat enthusiast. Flux is taking some time off school to join the Tour and test her experiments in the field. Flux uses a handy laser pointer to guide her fearsome Rockats around the arena, terrorizing her opponents. All in the name of science!

Flux can also create a massive Black Hole Cat that gradually moves across the map, growing bigger all the time as it feasts on any rockets in its path. With a fully-fed Black Hole Cat, Flux can help her team push towards objectives and zone out opponents. This is one fat cat you don’t wanna mess with.

Flux prefers to control her experiments from a distance, but if some disagreeable opponent gets too close, she can shift into another dimension to escape and traipse around the arena unseen. That should come in handy. She may be a bit odd, but we think this kooky kid’s got a real shot at winning the Tour!

Break out the sunscreen — the Tour is going Tropical this Summer in our first event. The next stop takes our heroes to the tropical paradise that Blastbeard calls home: Crater’s Edge. Get ready to loot, pillage, and have a blast, August 12-August 25.

And be sure to bring your sea legs to two new tropical maps: Grand Harbor and the Lagoon of Doom. No worries if you don’t know how to surf. Just perfect the art of Rocket Jumping on water if you want to stay dry. And leave some space in your suitcase for goodies because you’ll be able to pick up plenty of tropical new outfits. Plus, all Blast in Paradise outfits come with a tropical Crater’s Edge character stand, and a unique background, so you’ll have plenty of mementos to take home from your trip to paradise. Plus try out six new event playlists, including Treasure Hunt, Beach Ball, and Doubles!

Take a moment to catch your breath, because the second event is barreling your way at unsafe speeds — Runaway Megadon arrives in September!

Boost Your Collection with Blast Pass

While there’s plenty of exciting free rewards you can earn just by playing, if you want to take your collection to the next level, be sure to grab the Season 1 Blast Pass. Complete all the Season Challenges to unlock 117 rewards, including 33 outfits! Plus, you can earn up to 1500 Rocket Fuel to use for Outfits, VFX Trails, Totem Parts, or even all of next season’s Blast Pass.

XP Boost rewards will keep your progress moving quickly throughout the season, but if you want to go even faster, party up with some friends to take advantage of the Party XP Boosts. There’s a real treasure trove here, so don’t pass it up — grab your Blast Pass and get to blasting!

Rule the Arena in Ranked

Hopefully, you’ve got your shooting boots on now that pre-season is over. All ranks reset for Season 1 and now the real action begins. Get out there and trade rockets with the best players in the land. Win matches in Ranked and collect your badge. The more you win, the higher you’ll climb! Can you get to 50? We’ll be very proud of you if you do. But we’re proud of you already, just for reading this article.

There’s so much to see and do and shoot rockets at in Season One. By now hopefully you’ve figured out the basics and you’re ready to leap into ranked and try out all the fun new modes coming in the Blast in Paradise event. Hope you have a blast, and we’ll see you out there! 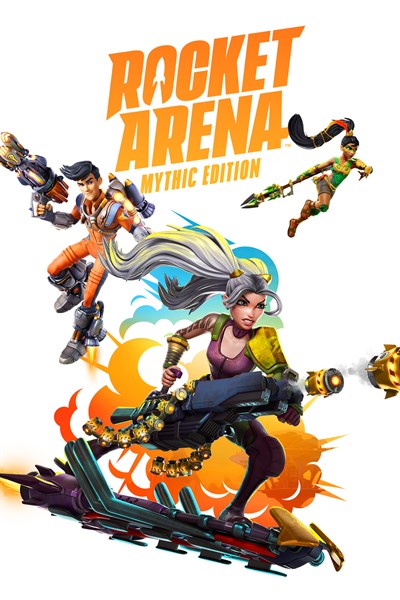 Welcome to a world where the rules are written in rocket fuel.

Rockets rule everything in Rocket Arena, an explosive 3v3 shooter where you’re never out of the action. Master your hero’s unique rockets and abilities to rule the arena and become a champion! Try out an ever-growing roster of fantastic heroes with distinctive powers. Unearth new strategies and tactics based on your squad, explore a wide variety of dynamic maps, and discover the true depth of rocket gameplay.

Fuel your inner hero with the Mythic Edition!

Rocket-Fueled Heroes
Explore a growing roster of fantastic heroes, each with distinctive personalities, backstories, and rivalries. Master your hero’s powerful abilities and signature rockets and get the most out of your squad.

Death-Defying Action
Never say die, because in Rocket Arena, you can’t! Taking too many hits will blast you out of the arena, but not out of the action. Ride your rocket right back in, survey the scene, and return to the fight.

Reach New Strategic Depths (and Heights)
Rockets are easy to use but challenging to truly master. Learn how to time your dodges, lead your targets, and use items and gadgets like the Rocket Magnet, Trip Mine, and Speed Boost to change the course of combat. Become one with your rocket and you will rule the arena.

Explore a Bold New World
From tropical ruins of The Gemstone Jungle to the high-tech, utopian Boom City, the world of Crater is home to many exotic locales. Each map is filled with hidden tricks, traps, and lore to explore. Use your rockets to jump, climb, and explore the environment. There’s a world of possibility, so grab your rockets and take off!

Evolve Your Heroes
The sky’s the limit for your heroes. Every match you play with them earns experience, unlocking Rocket Parts, Totem Parts, and spectacular outfits you can use to customize their look. You’ll also unlock powerful artifacts as you play — mix, match, and level them up to give your heroes impressive new stat boosts and effects! You’ll need every edge you can get to rule the Rocket Championship Tour.

Change the Game
There’s more than one way to play. Dive into Knockout for classic 3v3 competitive action, or warm up first against RocketBots and test out your favorite combos. Compete to score goals in Rocketball, control zones in Mega Rocket, and go for the gold in Treasure Hunt. When you’re ready to go rocket-to-rocket with the best, dive into Ranked Play and show ‘em what you’re made of. Let’s Rocket!

© 2020 Final Strike Games, Inc. [EA and the EA logo are trademarks of Electronic Arts Inc.] Trademarks are the property of their respective owners.

Journey Through the Wastes of Hell in Neverwinter: Avernus