Best gaming mouse: The top mouse for gaming in 2020

Picking the best gaming mouse is a more difficult task today than it was a decade ago. The playing field has been somewhat levelled thanks to improvements in sensor and wireless technology, and there are more competing products than ever. But it’s still possible to make the right choice if you know what it is that you want from a gaming mouse, whether that’s the sensor precision needed to hit those sick Valorant or Fortnite flick-shots, or a heap of programmable buttons for all your World of Warcraft macros.

So we’ve tested the best to give you the definitive answer as to whether you should be spending your hard-earned cash on the best Razer mouse, Logitech mouse, or Corsair mouse. But don’t forget, there are also some pretty fantastic SteelSeries mice out there, and Roccat gets a mention on our list, too. Plenty to choose from.

There are many options, and nailing down exactly what you want can be tricky. As ever it’s a delicate balancing act of finding the right mix of features and design. You have to juggle comfort, ergonomics, performance, reliability, specs, and always aesthetics. Figure out which of these attributes are most important to you, and then take a dive into the comparisons below.

However much you like your gamer aesthetic, if it can’t deliver the goods in-game then it’s not at all effective. We’ve tested a wide variety of gaming mice and have finally narrowed down our favourites in a selection of categories, as well as the overall best gaming mouse to buy right now.

Here are your options for the best gaming mouse:

The best gaming mouse is the Logitech G Pro Wireless.

Yes, the best gaming mouse is also a wireless mouse. Bringing together featherweight ergonomics, a high-performance sensor, and flawless wireless connectivity, the Logitech G Wireless Pro has risen swiftly to the top of our best gaming mice charts. Plus, it’s ambidextrous.

The Wireless Pro is equipped with interchangeable switches and a DPI switch hidden on the underside of the mouse to avoid accidental button presses. And when it comes to gaming prowess, the mouse offers the best performance we’ve experienced in-game. As long as you’re okay spending $150 on a mouse, the Logitech Wireless Pro can’t be beaten.

Logitech’s wireless connectivity is flawless, too. Both reliable and consistent, the days of wireless mice lagging behind their wired counterparts are long gone. And if you need convincing, just take a look at some of the best esports players on the planet and you’ll notice they prefer the fluid motion of a wireless mouse over a wired alternative. If it’s good enough for the pros, then it’s probably just fine for the regular gamer. 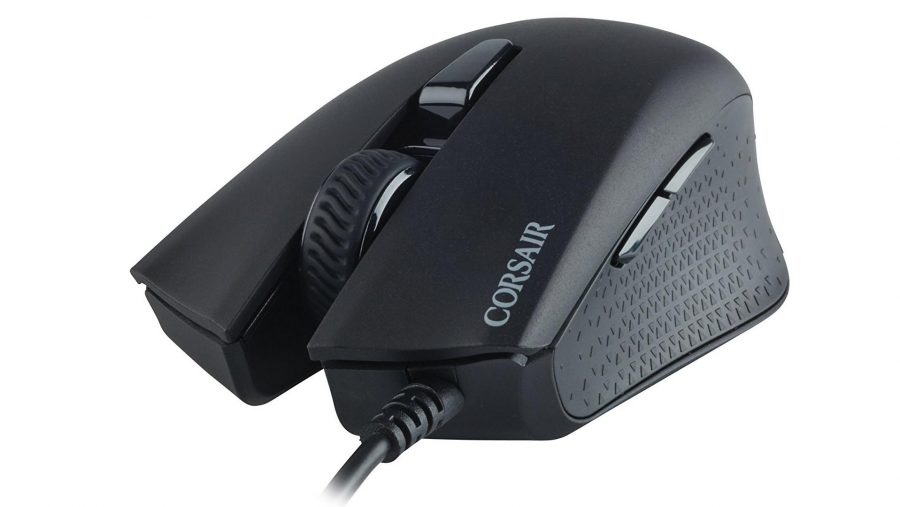 The best budget gaming mouse is the Corsair Harpoon RGB.

The Corsair Harpoon RGB is a great value gaming mouse. The 6,000 DPI optical sensor at its heart is a Pixart 3320, offering the 1:1 tracking we’ve come to love their latest sensors for, but without the extreme sensitivity that makes them perfect for high-res displays. It’s also incredibly lightweight and will fly across your desktop. Great for 1080p gaming, not so much for 4K. It’s also mighty comfortable as long as you’re using palm grip – not so much for claw grip.

This mouse is by far the best mouse we’ve tried at this price range. While it’s not the best all-round mouse, being the best cheap mouse is no mean feat, either, and the Harpoon RGB is worthy of a spot on our list for that reason. 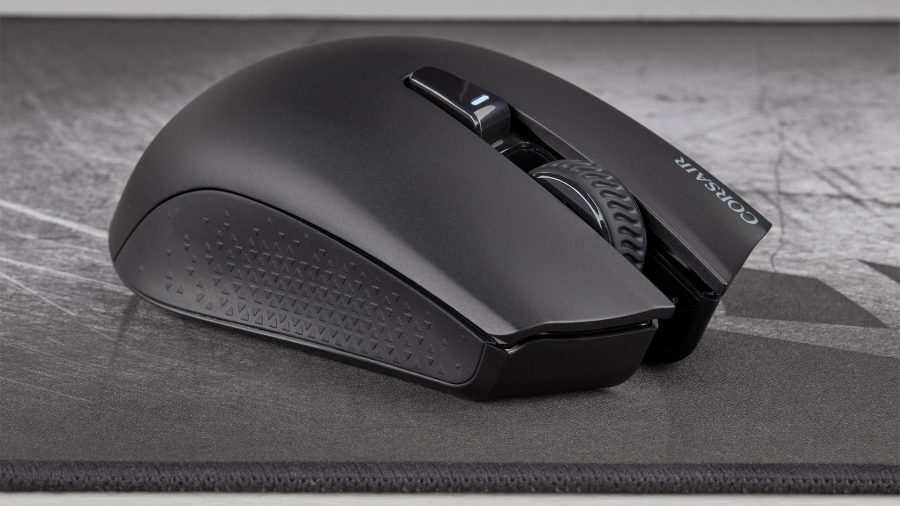 The Corsair Harpoon Wireless sure packs a punch for only 50 bucks. Few wireless devices offer such a balanced and impressive blend of performance and value, and the Corsair brand sure nets you a few added benefits, too – including some of the best software in the game and trusted quality assurance.

With smooth, lag-free performance powered by Corsair’s Slipstream wireless technology, the Harpoon offers more than enough speed and responsiveness for most gamers. Not only that but it offers 2.4GHz and Bluetooth connectivity, great battery life for on-the-go gaming, and features a handy 2.4GHz dongle slot on its underbelly so you don’t misplace it on your travels. 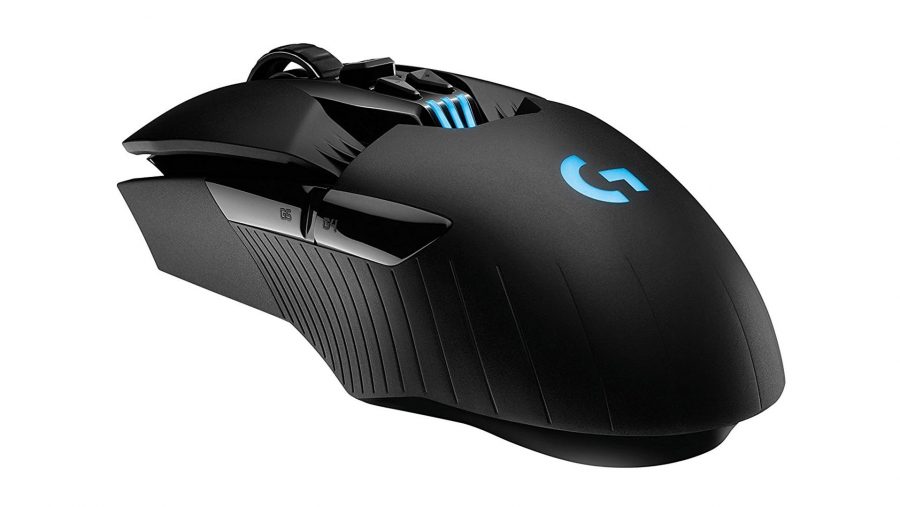 The best left-handed gaming mouse is the Logitech G903.

The G903 was the outright best gaming mouse to buy until Logitech stepped its game up with the Wireless Pro. Nevertheless, the G903 is a magnificently versatile gaming mouse that manages to be pretty much all things to all people. It’s almost the same as the brilliant G900 Chaos Spectrum, but with compatibility for our favourite bit of wireless tech, the Logitech G PowerPlay, which means it can keep its battery charged wirelessly simply by using it on the PowerPlay gaming surface.

It’s rocking an ambidextrous design, with only a slight compromise in comfort for either left or right-handed users, and its ergonomic layout is equally adept at catering for either claw or palm grip gamers. The G903 can also be used either as a wired or wireless gaming mouse, and we’ve detected no compromise in performance should you decide to game without the cable.

Read the PCGamesN Logitech G903 review for our full verdict and score. 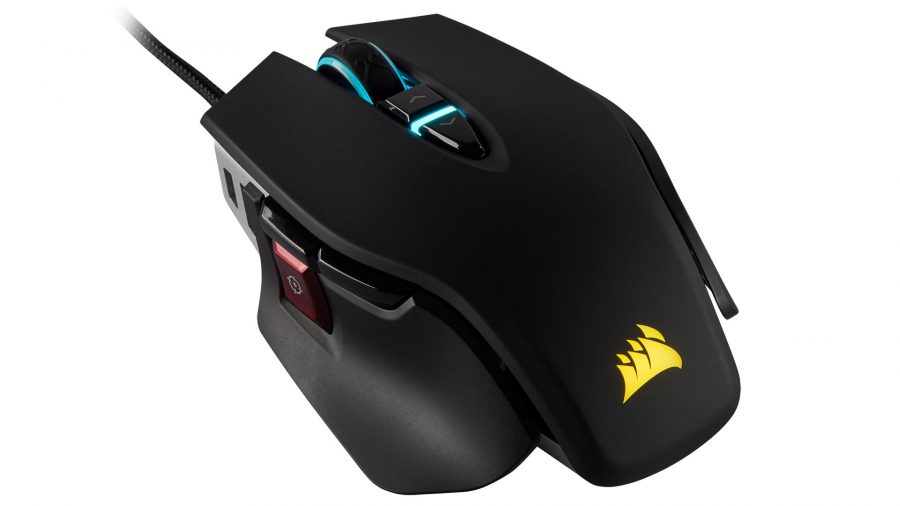 With a price tag equal to the great M65 Pro before it, there’s little reason not to pick up the new and improved Elite instead. The glide pads make sure it doesn’t feel sluggish, and removable weights on the underside mean you can bring the overall weight down to 97g if it’s bothering you. This adjustable weight feature makes it an incredibly versatile mouse.

The sturdy construction and braided cable gives the M65 Elite a feeling of quality, even if it’s something of an acquired taste. It’s not quite our pick for the top mouse of all time, but it’s cheaper than many of our other favourites. It’s functional, comfy, and has that quality stamp of approval we’ve come to expect from Corsair.

Read the PCGamesN Corsair M65 Elite review for our full verdict and score. 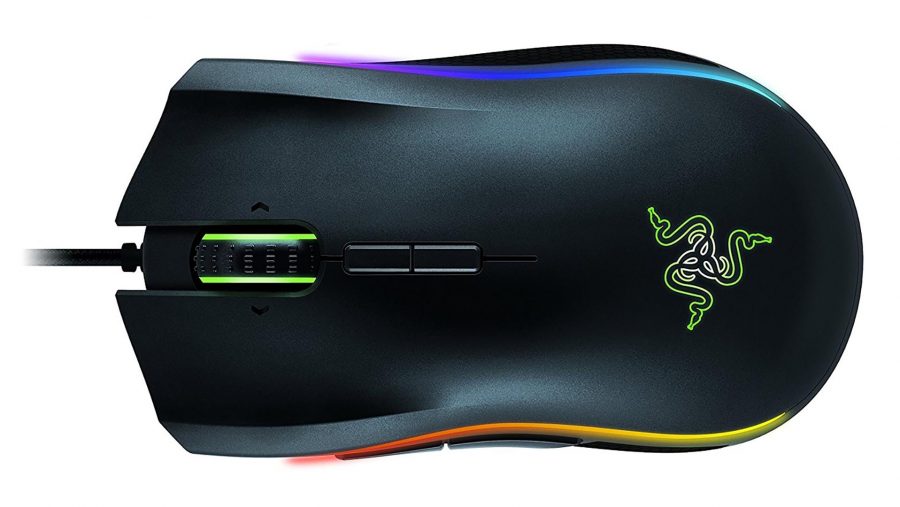 There are some people who prefer laser sensors in their mice and the Philips sensor in the Mamba is still an excellent option. With the hardware acceleration you might think they’re crazy, but laser sensors care not for the surface they skim across so can be a more versatile option if you’re travelling around without a mousepad.

The Mamba is also an incredibly comfortable gaming mouse, with a relatively light touch too. It doesn’t glide across your desktop quite as well as the Logitech options, but it’s still a great gaming mouse in its own right. 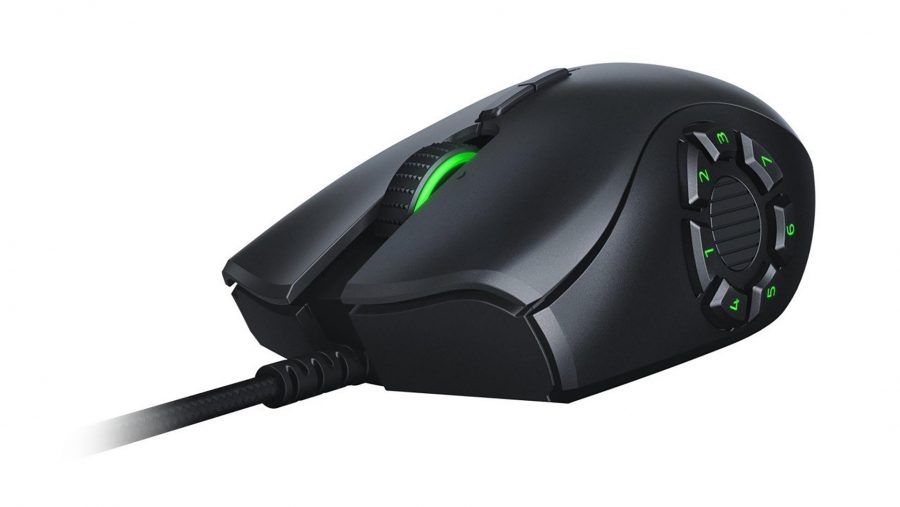 The best MMO gaming mouse is the Razer Naga Trinity.

Razer’s Naga has long been known as the best MMO gaming mouse, but, if we’re being honest, it was incredibly annoying to use for any other game type. All those extra buttons, arrayed in a grid of 12 around your thumb, were constantly responsible for errant thumb strikes.

But the Naga Trinity has removed that problem, while still retaining the ability to use the classic 12-button grid for your favourite MMO or MOBA. The special sauce is a magnetic attachment mechanism that allows you to remove the whole side panel of the mouse without doing anything more than levering it off. It’s completely hot-swappable so you can add or remove any of the three interchangeable panels at will without having to dig into the settings or unplug it. There’s the 12-button panel, a seven-button version arranged in a wheel, and a simple two-button design for basic use.

Read the PCGamesN Razer Naga Trinity review for our full verdict and score. 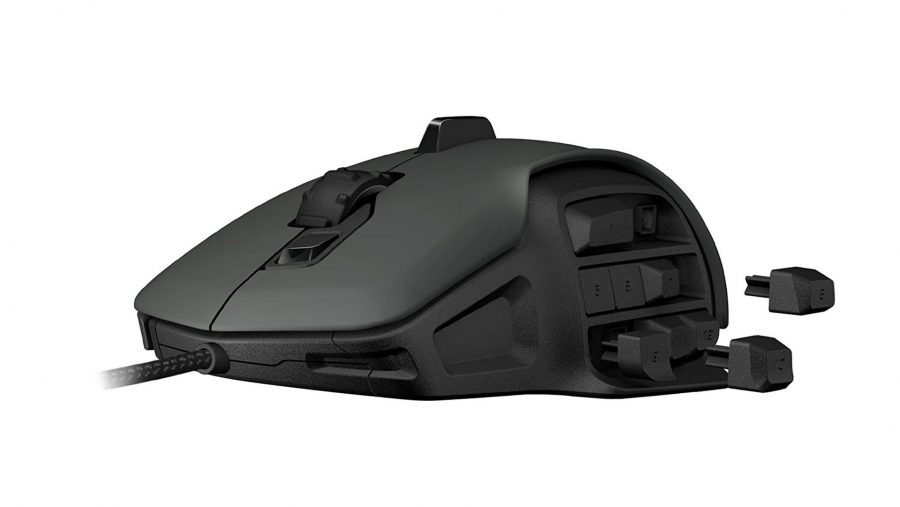 The best customisable gaming mouse is the Roccat Nyth.

The many-buttoned Roccat Nyth was our previous pick as the best MMO mouse around, and it still makes for a great configurable option. The Philips laser sensor is impressively accurate and the different optional grips make it a versatile gaming mouse, if a little too chunky.

The biggest tick in the pro column for the Nyth is the way it arranges its extra thumb buttons. You can have as few as three extra buttons or as many as 12 and any combination in between. It doesn’t come with a different innovative button layout option like the Naga Trinity offers, but it does allow for complete customisability, letting you have the exact amount of buttons that you desire.

choosing a keyboard to go with your mouse

To go along with your top tier gaming mouse, here’s our handy video guide on how to decide which gaming keyboard to buy. PCGamesN also has a full guide on the best gaming keyboards in 2020. 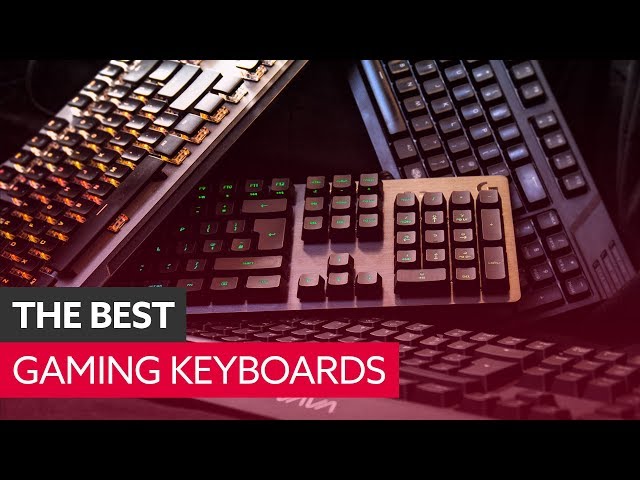 Picking a gaming mouse depends massively on what genre of games you play, whether you are right- or left-handed, and how you hold your mouse. So it’s hard to pick a single mouse that’s unrivalled in every aspect.

The Logitech G Pro Wireless is our best all-rounder, and is as close to that ultimate mouse as we’ve found so far, but that doesn’t rule out any other mouse on the list.

With its hot-swappable design, the Razer Naga Trinity is unsurpassed for MMO gamers, and its thumb configuration is easily swapped out for gaming in just about any other genre, too.

The Corsair Harpoon, too, is a fantastic all-terrain mouse that gives up some of the flash for simple and effective functionality on a budget.