There’s nothing quite like the added vocal clarity offered by the best gaming microphone, whether you’re streaming, recording your own podcast, or you just want everyone to comment on your velvety voice when playing your favourite multiplayer games. And since we’re spending more time indoors on Discord and Zoom than ever before, now is the ideal time to upgrade and cut out all that background noise.

Even the best gaming headset, the Razer BlackShark V2, which boasts a particularly clean mic for an all-in-one solution, can’t keep up with a dedicated microphone. After all, these products are designed from the ground up to capture your voice as close to the way it sounds in real life as possible. Better yet, they’re becoming more affordable and accessible, with many falling below the $100 price tag and ditching some of the faff required to set them up.

XLR microphones are still the go-to if you don’t want to compromise on sound quality, but the popularity and prevalence of plug-and-play USB microphones mean you no longer need to be an audio engineer to take the leap as these cut out the need for separate interfaces entirely. We have a selection of both types in our list of best gaming microphones, and a buyer’s guide to help you through what you’ll need to get started.

Here are the best gaming microphones:

The best gaming microphone is the Blue Yeti X

Anyone who’s remotely familiar with gaming microphones won’t be surprised to see Blue topping the list, given that the original Blue Yeti made the desktop microphone a staple streaming item. The Blue Yeti X only features improvements, too, combining the greatest elements of its predecessor with its smaller Nano model, resulting in the best gaming microphone on the market.

$169 / £160 is a bigger bite of your wallet than the original, but the sound quality is better than ever with an extra condenser mic capsule and a toggle for background noise reduction, getting rid of extra whispers and hums. Visually, it’s far sleeker than the dated cylindrical approach, making sure you look professional in your video calls – although we wouldn’t plonk it so close to the best gaming mouse like the picture above. It’s even got an LED volume meter around the customisable smart knob to cut through the bright lights of your monitor when you want to make on-the-fly adjustments. Plus, there’s now a reasonably sturdy stand if you don’t want to mount it on an arm.

For that price, you might be considering an XLR setup instead, but the Blue Yeti X’s plug-and-play nature makes it an exceptional value for money and accessible to boot. You’ll also be able to make use of the Blue Voice section of the Logitech G Hub software, allowing you to make adjustments and tinker with presets made by you or others. And, if you don’t mind spending a bit more, there’s even a World of Warcraft edition. 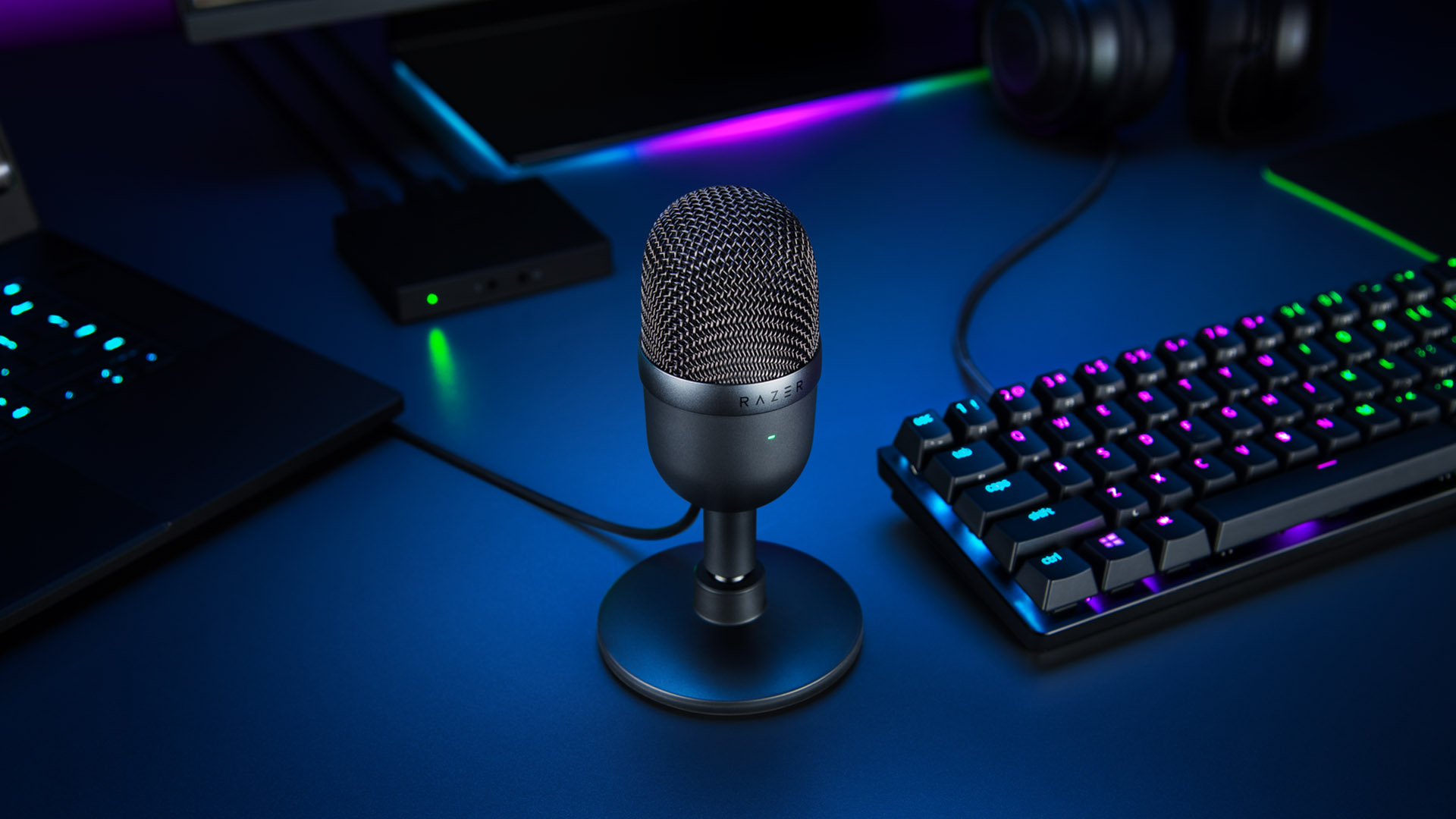 There are plenty of unbranded value options to choose from, but if you want the best bang for your buck then you’ll want the Razer Seiren Mini. You’ve heard of the phrase ‘the best things come in small packages’, right?

The Razer Seiren Mini might be one of the most compact microphones we’ve ever seen, but it’s packing a lot of technology to ensure its sound quality rivals the Blue Snowball, and perhaps even the Blue Yeti if your household is quiet enough. At $49.99 / £50, its price to performance ratio makes it the best budget gaming microphone around.

Its stand is good enough with a built-in shockmount, but it’s worth sticking the Razer Seiren Mini onto an arm and moving it closer to your mouth. This will allow you to keep it away from the loud clicks of the best gaming keyboard. You’ll need to adjust things like gain in the software, as there are no physical dials, so it can be a tad tricky to optimise the amount of background noise you pick up. 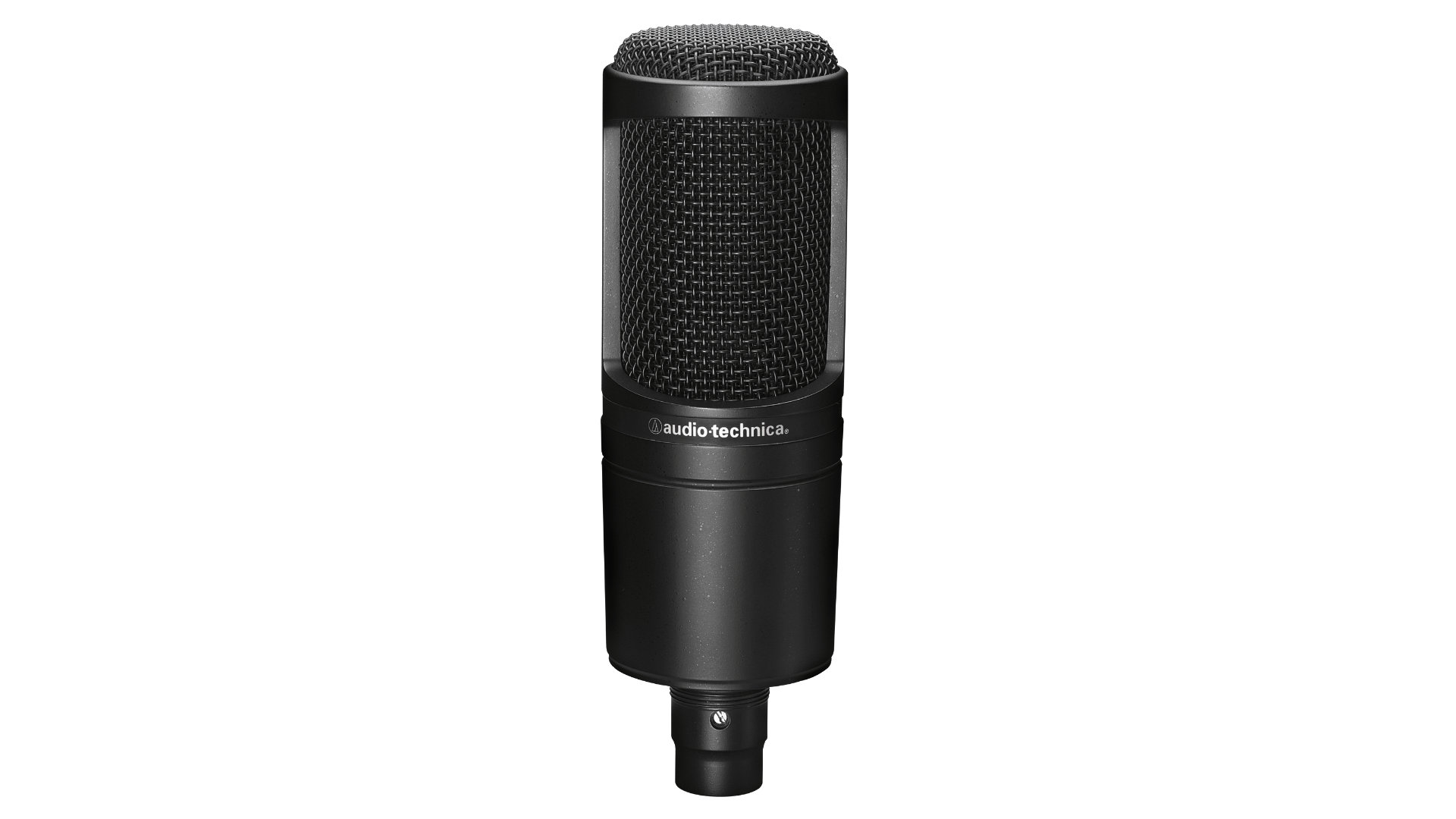 The best budget XLR gaming microphone is the Audio-Technica AT2020

Audio-Technica is a professional audio brand that often sits up there with the likes of Rode, Shure, Sennheiser, and Beyerdynamic, but it’s also had the best entry-level XLR microphone for quite some time. Despite the 2004 release of the original, the Audio-Technica AT2020 is still the best budget XLR gaming microphone you can get your hands on.

The crystal clear audio only requires 48V of phantom power or more, meaning a relatively inexpensive Focusrite Scarlett Solo preamp will do the trick if you don’t want to spend the extra on the best XLR audio interface. It also doesn’t carry the same ‘gamer’ aesthetic as most of the entries on this list.

The only downside is that its $99 / £79 price tag doesn’t include a stand, but like all gaming microphones, it would benefit from being attached to an arm, anyway. 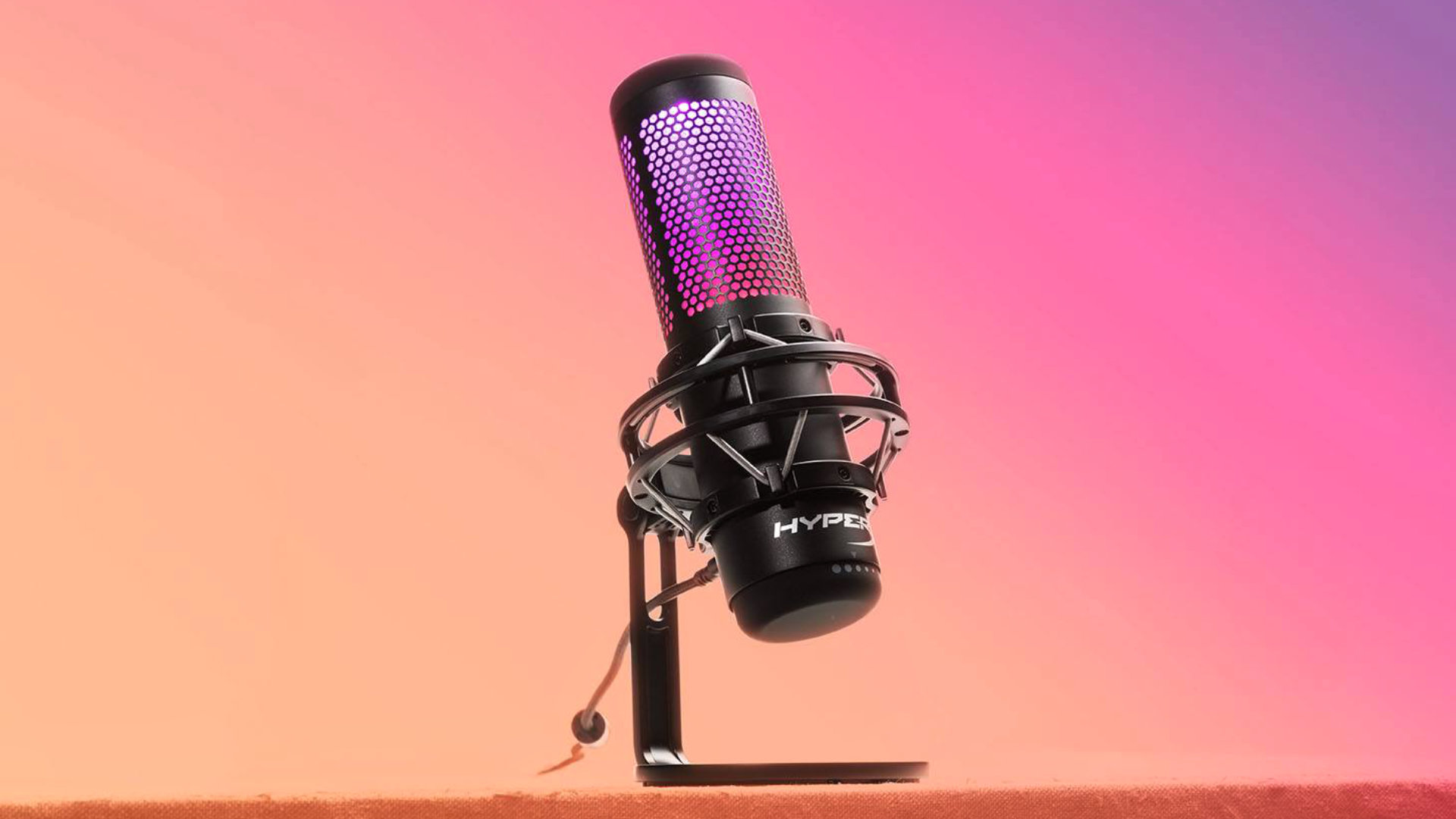 The best gaming microphone for streaming is the HyperX QuadCast S

You can stream without a webcam, but broadcasting without a microphone removes the interactive element with your viewers, making audio quality all the more important. If you do stream with a camera, however, then the HyperX QuadCast S is the best gaming microphone to show off.

In fact, it’s the only RGB gaming microphone we know of, with its closest rival being the Razer Seiren Emote. While the Emote’s distinct animations are eye-catching, they are limited. The lighting within the HyperX QuadCast S takes up the entire head of the microphone, however, allowing you to add your own flare of personalisation through colour.

The quality of the HyperX QuadCast S is the same as the original red LED model, which is to say not as clear as the Blue Yeti X but still crisp. It also features the same built-in shockmount to dampen the sound when you accidentally (or purposefully, we’re not judging) bang against your desk, which feeds into its value given that shockmounts aren’t cheap. $159.99 / £159.99 is the asking price for the QuadCast S, but if you are willing to give up the RGB lighting, the original will set you back $139.99 / £119.99. 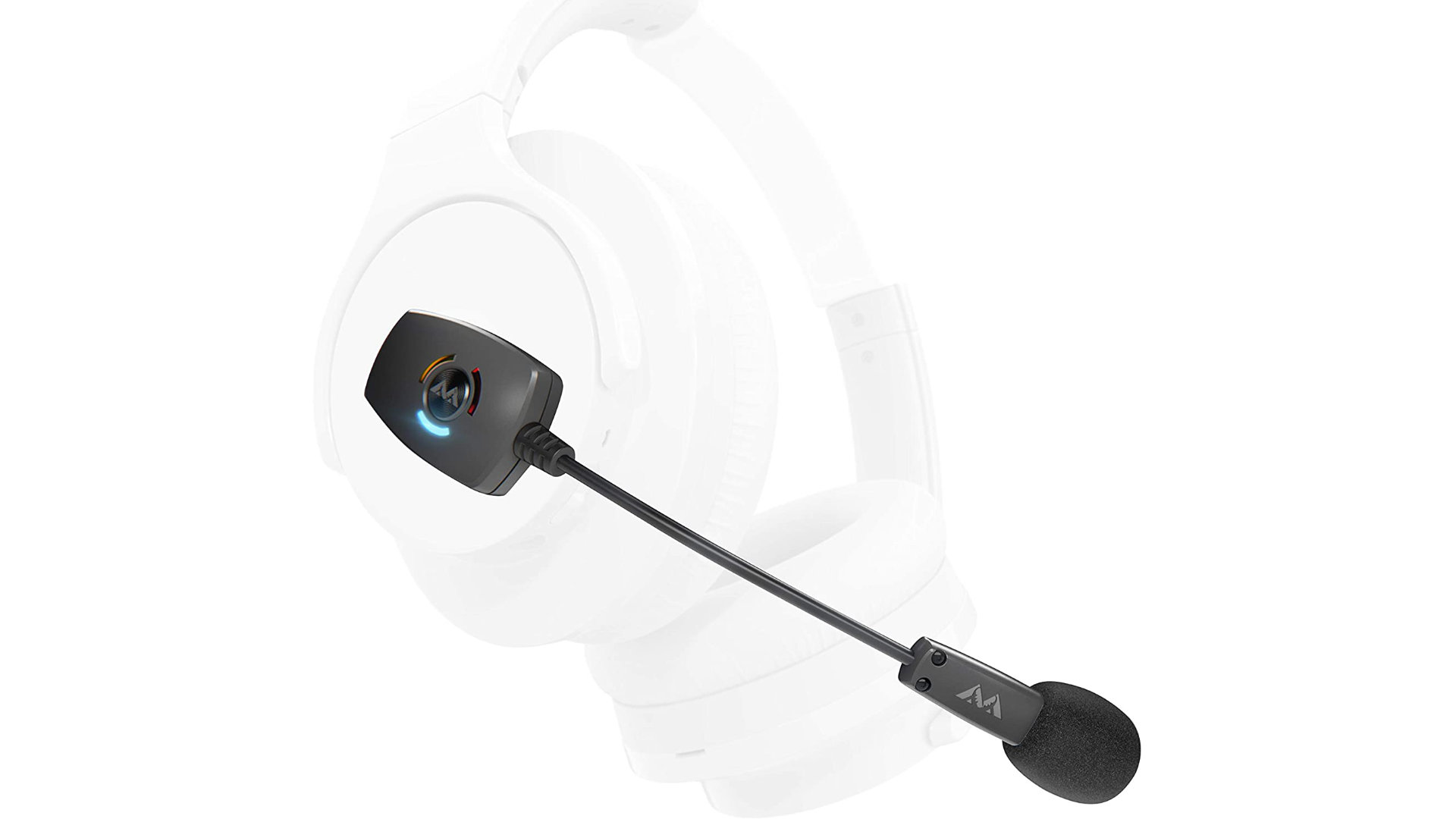 Not everyone wants a gaming microphone taking up valuable desk space or attached to an arm that hovers over you. This is where the Antlion Modmic Wireless comes in, sticking to the side of your headphones or headset, leaving you free to swing around on the best gaming chair without getting tangled – provided you’ve got a wireless gaming headset that is, otherwise you’ll be yanked back by other wires.

Modmics often sound almost as good as their desktop counterparts, which is an impressive feat considering how compact they are in comparison. The Modmic Wireless is naturally the most portable of them all, and it doesn’t sacrifice quality thanks to Antlion’s use of aptX Low Latency technology to keep ping as little 34ms and the range up to 32 feet (ten metres).

The biggest drawback is remembering to charge it, but it’s no trouble if you forget because you can use it wired while juicing it back up. Once it’s ready, just connect it to the USB dongle and check the LED status indicators to make sure you’re good to go. It’s even compatible with Windows, Mac, Linux, and even PlayStation 5, but you unfortunately won’t be able to get it working on Xbox consoles. 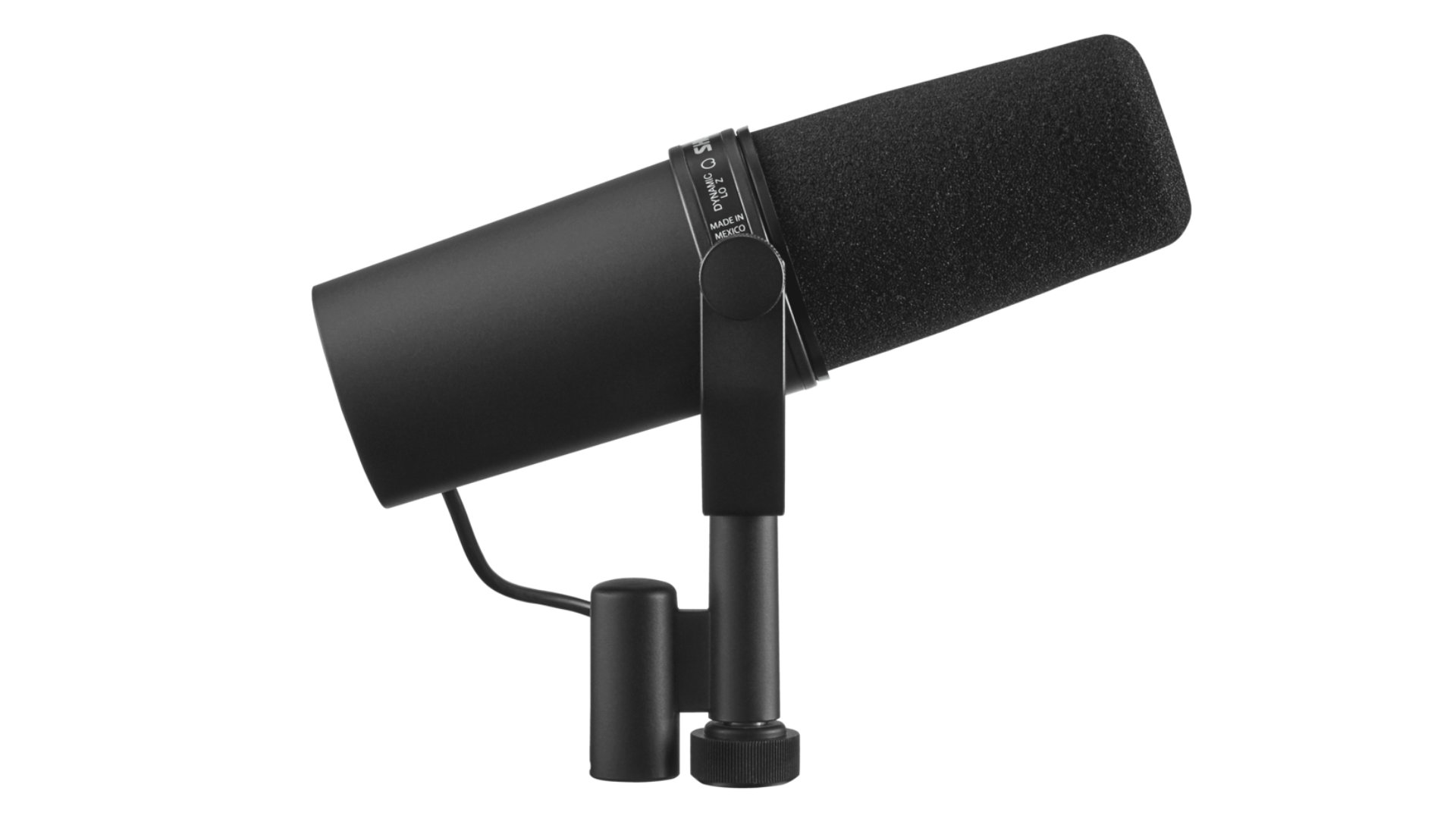 The best high-end gaming microphone is the Shure SM7B

If you’re wondering what the go-to microphone is for most of your favourite content creators, radio stations, and musicians, it’s the Shure SM7B with an XLR interface. As the only dynamic microphone on this list, it’s much less sensitive than the condenser microphones, meaning that noises like the ceaseless clacking of a mechanical keyboard are unlikely to be picked up.

There’s a reason the Shure SM7B is held in such high regard, with a built-in windshield, a mounting bracket that doubles up as a shock mount, and a staggeringly high 96kHz sample rate – although very few people will want to use the full range anyway – it’s the clearest microphone we’ve used.

That shouldn’t be surprising given just how much it costs. Its hefty $399 / £356 price tag means this gaming microphone certainly isn’t for everyone, and the cost is pushed up even further when taking into account that the Shure SM7B needs at least 60db of gain from an external source. This leaves cheaper audio interfaces out of the question unless paired with a $149 / £149 Cloudlifter, but pairing it with the best XLR audio interface does make for an unbeatable microphone setup without spending thousands. 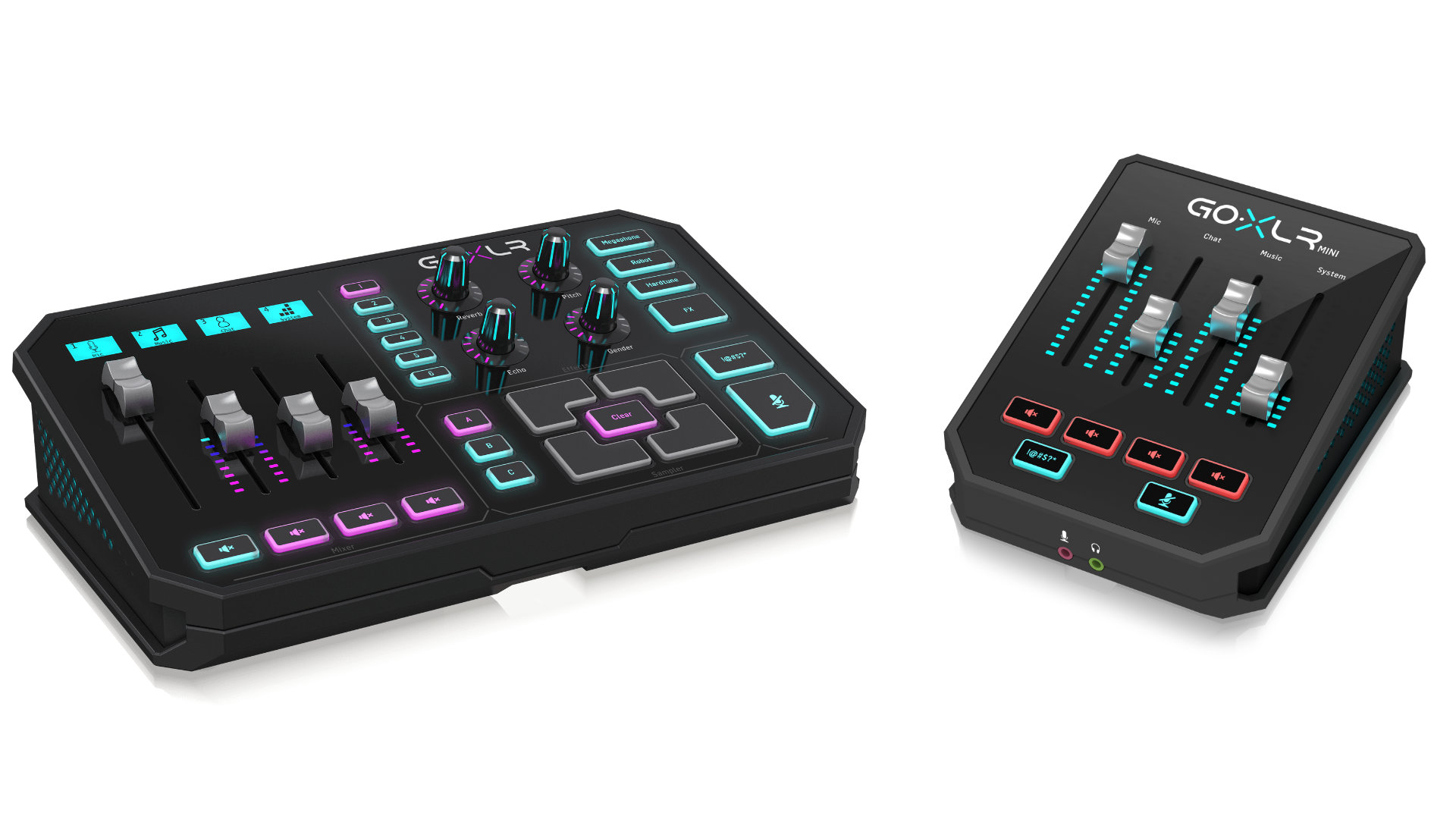 The best XLR audio interfaces are the GoXLR and GoXLR Mini

Using an XLR microphone requires a good audio interface for phantom power, and none offer more value for money than TC-Helicon’s GoXLR series. The full sized model is a hybrid preamp, mixer, sampler, and sound board all for $399 / £330 MSRP, while the GoXLR Mini strips away the latter two features for a slimmer $248 / £142 price tag.

Both devices have a low-noise Midas preamp inside that pushes up to 72db of gain, giving them the ability to power even the most demanding of microphones, like the Shure SM7B. Admittedly, they’re only good for a single microphone setup with one XLR input, and are a little too reliant on software to the point where they won’t work without it running in the background, but it’s intuitive enough to help newcomers set things up easily and customise RGB lighting, equalisers, compressors, and de-essers to get rid of awkward hisses.

The four separate faders allow you to set different applications to separate channels, so you can adjust volumes independently of one another. We’ve been using the full-sized GoXLR for the better part of a year and couldn’t go back to a single channel without a fight, as it’s proven invaluable to crank Discord up or the system sound down when gameplay gets loud. All in all, it’s the GoXLR Mini that’s the star of the show with its value for money, provided you’re willing to give up the streamer-specific features, that is.

Most gaming microphones only come with a desktop stand, while some don’t come with a stand at all. No matter which one you go for, however, you should consider getting a swivel arm to accompany your purchase, whether that’s a desk clamp or standing model. This way, you can position the microphone further away from your noisy keyboard and closer to your mouth, allowing you to then turn down the gain and cut out as much unwanted background noise as possible.

In the ongoing argument of USB versus XLR, there isn’t a clear winner. XLR microphones are largely better in quality but require a bigger investment and a little bit of know-how to configure with a preamp. There are plenty of USB microphones to choose from nowadays that can simply be plugged in without any arduous setup, but they are far more sensitive than their XLR counterparts at picking up surrounding noises. It’s entirely down to your preferences and budget which suits you better.

Read more: Check out The Loadout’s guide on how to stream on Twitch

In fact, AI is being used in a variety of different ways to clean up live audio and remove unwanted background noise. RTX Voice uses this approach, granting anyone with a ray tracing-capable Nvidia graphics card the power to polish both incoming and outgoing audio via software. Asus meanwhile has taken the hardware route with a noise-cancelling mic adapter that broadly does the same thing for 3.5mm headsets.

This Week on Xbox: New Games, Upcoming Releases, and Events