The dust has finally settled from the catastrophic meteorite crashing into the CPU market that was AMD Ryzen 3000, and we’ve stuck the Asus ROG Strix X570-E Gaming in the test bench to see what this high-end X570 motherboard can bring to the table with the newly-crowned best gaming CPUs.

And the Strix X570-E is no slouch. Sitting in between the Asus TUF Gaming X570-Plus and the Asus ROG Crosshair VIII Hero (Wi-Fi), this board represents best in class functionality without resorting to the enthusiast pricing excess of some of the highest high-end gaming build budgets. You can pick this board up right now for $327 (£302).

For starters, this kit is ready to go for any Ryzen 3000 CPU, and features the wiring prerequisite for PCIe 4.0 connectivity. If you’re buying an X570 of this calibre, you best be prepared to put that excess bandwidth to good use with a one of the handful of PCIe 4.0 drives on the market today. If that appeals to you, read on. If not, go grab a cheaper X470 or B450.

And that’s because, while there’s plenty to love about the Strix X570-E, many of the same beneficial features can be found on any number of near-identical X470 boards, including Asus’ own. And PCIe 4.0 isn’t all that useful for gaming, either.

Okay, so you’ve made it this far and you’re on board with the X570 chipset, what in the living heck makes this board worth the money over the cheaper TUF Gaming? Well, for one, the Strix is equipped with a 12+4 phase VRM, pieced together from high quality alloy chokes and capacitors, capable of delivering clean power to your CPU, and cooled by a dual heatpipe and heatsink design.

Paired with the active chipset fan necessitated by the higher TDP of the homegrown AMD X570 chipset, this makes for a cool and comfortable board that’s got the headroom, both in component durability and cooling, for a touch of overclocking.

We have found that an all-core overclock on Ryzen 3000 isn’t particularly rewarding. Something to do with “not leaving any performance on the table” on AMD’s behalf. Nevertheless, if there is any extra performance lying dormant within your particular chip, or individual chiplets, the Strix X570-E has the right tools for the job to keep it ticking over nicely.

The Strix X570-E is also fitted with enough PCIe slots and NVMe M.2 connectors to sate most players’ demands for storage capacity. There are dual dedicated M.2 slots, three PCIe 4.0 x16 slots (one x8 and one x4 when occupied) and two x1 slots, which should leave capacity open for further expansion down the line, especially with Nvidia and AMD’s apathy to multi-GPU rigs nowadays.

With the memory controllers and quite a bit else long since shifted to the CPU’s uncore silicon, and manufacturing techniques improving to such a point that even the cheapest traces are pretty much spot-on, motherboard performance is largely just a throwback to days gone. But while X570 performance is relatively flat across the board, the important takeaway from the below performance graph is that the Strix X470-F performs ostensibly identically, if even slightly better (still within testing variance) on average.

Alongside that there are dual LAN ports, 2.5 gigabit and one gigabit; Intel Wi-Fi 6 capable AX200 networking courtesy of twin antenna connections from the rear I/O; and the customary audio jacks driven by the SupremeFX S1220A.

And that’s only the rear I/O. There are also two USB 2.0 headers, one USB 3.2 Gen 1 header, and one USB 3.2 Gen2 Type-C header on the board, too. Along with five 4-pin fan headers and two pump headers for all-in-one and custom loop numbers. 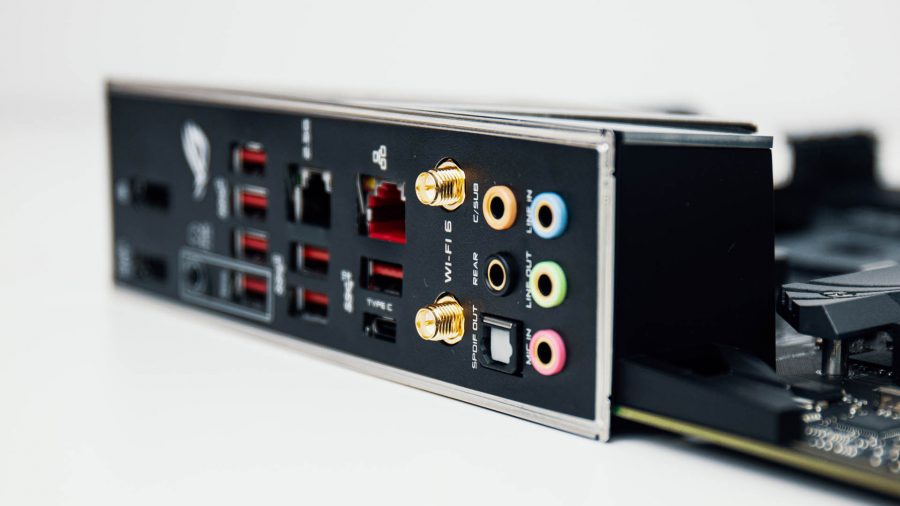 With quality functionality strewn across this board as far as the eye can see, it’s hard not to fall to the Strix X570-E’s appeal. With a generous budget this PCIe 4.0 motherboard will see you set for functionality, storage, and stability, and with a price tag cheaper than the MSI X570 ACE – and not all that dissimilar to the Crosshair VIII Hero – it’s a great buy, too.

However, it’s still difficult to recommend the X570 at this time. The PCIe 4.0 ecosystem, while effective in theory, struggles to offer much to gamers in the real world.

But you’re here, at the end of the review, so either you are a content creator thirsty for bandwidth, a platform consistency hound, or money is no object to you. Whatever sums you up best, with best in class features and a stylised design that is fairly neutral by gaming motherboard standards, the Asus Strix X570-E Gaming will deliver the goods.

With a carefully crafted selection of features and ports, the X570-E keeps all the best bits of the ROG enthusiast boards for gaming without the ultra-enthusiast price tag.