If you didn’t know already, today’s keycaps are often built using a cheap, robust, and easy to label plastic called ABS, or acrylonitrile butadiene styrene (catchy). This is the most common among gaming gear largely because it’s cheap and light, but that also makes it susceptible to wear, breakages, and developing a sheen over time. Lucky for us there are exceptions built from sturdier stuff. Enter PBT, or polybutylene terephthalate.

PBT is elusive in the gaming world largely due to its high cost and tricky translucence. But there are a few keyboards out there that ditch the bright lights for tough construction, and these are often favoured by gamers with heavy hands or those hoping to keep their $100 plus keyboards in one piece for a decent stretch of time.

The Asus Strix Scope PBT is largely identical to its ABS sibling by almost the same name – all bar its use of PBT keycaps. That has a few repercussions, of course. Such as a lack of RGB lighting and a fixed red and black colourway. Worthy sacrifices? I tend to think so, but let’s see what the Strix Scope PBT is bringing to the table.

If you’re typing on a PBT keyboard for the first time, the first thing you’ll notice is the distinct chatter. The clicky nature of ABS keycaps is instead replaced with the dull thud of PBT – and no sound is sweeter.

You’ll also notice these keys are different to the touch compared to the glossy sheen of ABS caps. PBT is distinguishable by its rough yet uniform finish. And while subtle at first, a few years down the line when your ABS keycaps are a slippery mess you’ll be surprised how well your PBT caps hold up.

Beyond PBT keys, the tell-tale sign of any ROG Strix Scope keyboard is the large, ‘Xccurate’ Ctrl key for unrivalled copy and pasting accuracy… or maybe it was FPS gaming. Either way, the Strix Scope’s Ctrl key is an absolute unit.

At the base of every key is one of Cherry’s MX mechanical switches for immediate and accurate response. The usual suspects are all here, too. From Cherry MX Red right the way through the muted rainbow to Cherry MX Speed Silver switches. Our particular review unit features middle of the road linear reds with a 4mm travel and 2mm actuation. If it ain’t broke, don’t fix it. 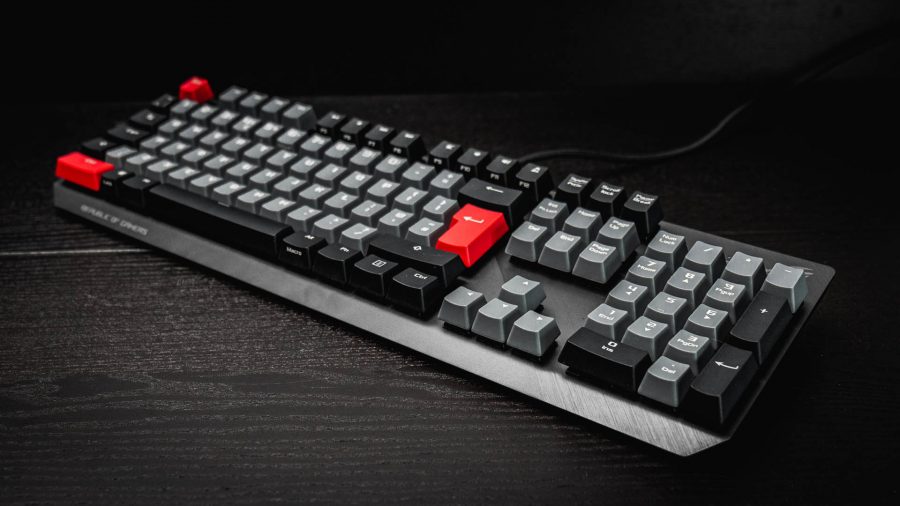 The Strix board itself is rather unspectacular, but not to a fault. It’s built like a tank, features all the bells and whistles one might expect from a gaming keyboard, and would make for a fine addition to an ROG rig. The braided cable ensures you won’t be soldering a new one on anytime soon, and while it may lack dedicated media keys, the handy Fn Lock shortcut keeps these shortcuts close to hand.

There is one shortcut I’m not entirely sure about. That’s the ‘stealth’ key. Hit Fn and F12 – or just spot the key with the shifty fellow on it – and your audio will be swiftly muted and all of your windows hidden. I can only assume Asus expects the Republic of Gamers is up to no good. Hacking, probably. And we all know the government can’t track you once you’ve minimised your windows. 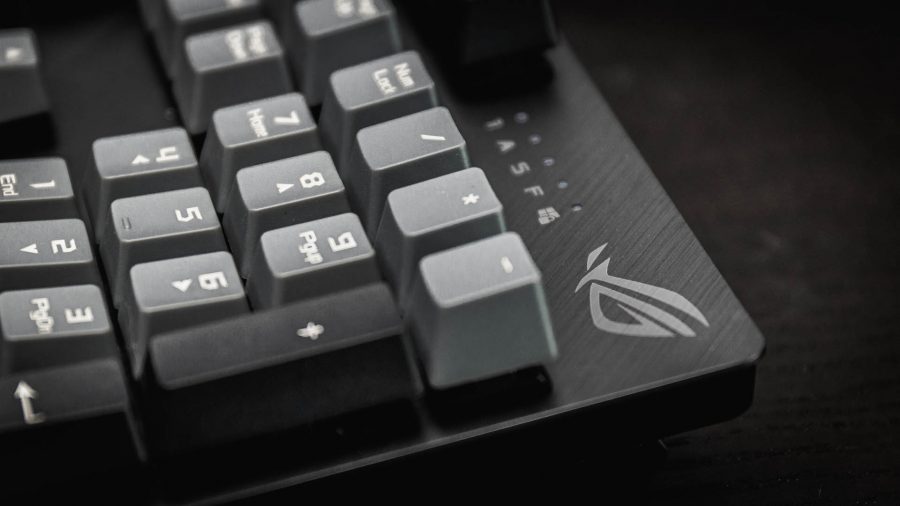 With a price tag right in the mix for a full-size keyboard of this quality, around £125, there’s plenty to love about the ROG Strix Scope PBT. But for all of my lobbying for this hardy keycap construction, the choice between these and the ABS option all comes down to personal preference. Keycap preference is subjective, and if you prefer the flash of an RGB board then the standard Strix Scope won’t see you wrong – but neither will the PBT version if you’re after resilience.

With a hardy construction throughout, the Asus ROG Strix Scope PBT is built to outlive the rest of your rig.