Among Thieves One of the Best PlayStation Exclusive?

Naughty Dog have seen a meteoric rise in popularity and stature over the last decade. They’ve always been considered as great developers, making their name with Crash Bandicoot and then building up their reputation with Jak and Daxter, but over the last ten years or so, they’ve ascended from being a great developer to flat-out being among the most talented, trusted, and beloved studios in the industry. Seeing the Naughty Dog logo on a disc is almost a guarantee of quality these days, and that can be attributed two two games- The Last of Us and Uncharted 2: Among Thieves.

We’ve already spoken about The Last of Us and what made it an excellent game in a recent feature, and here, we’ll be turning back the clock to 2009, going all the way back to the game that made the entire industry sit up and take notice of Naughty Dog as one of the all-time greats- Uncharted 2, the game that put Uncharted, Naughty Dog, and Sony as a first party publisher well and truly on the map. 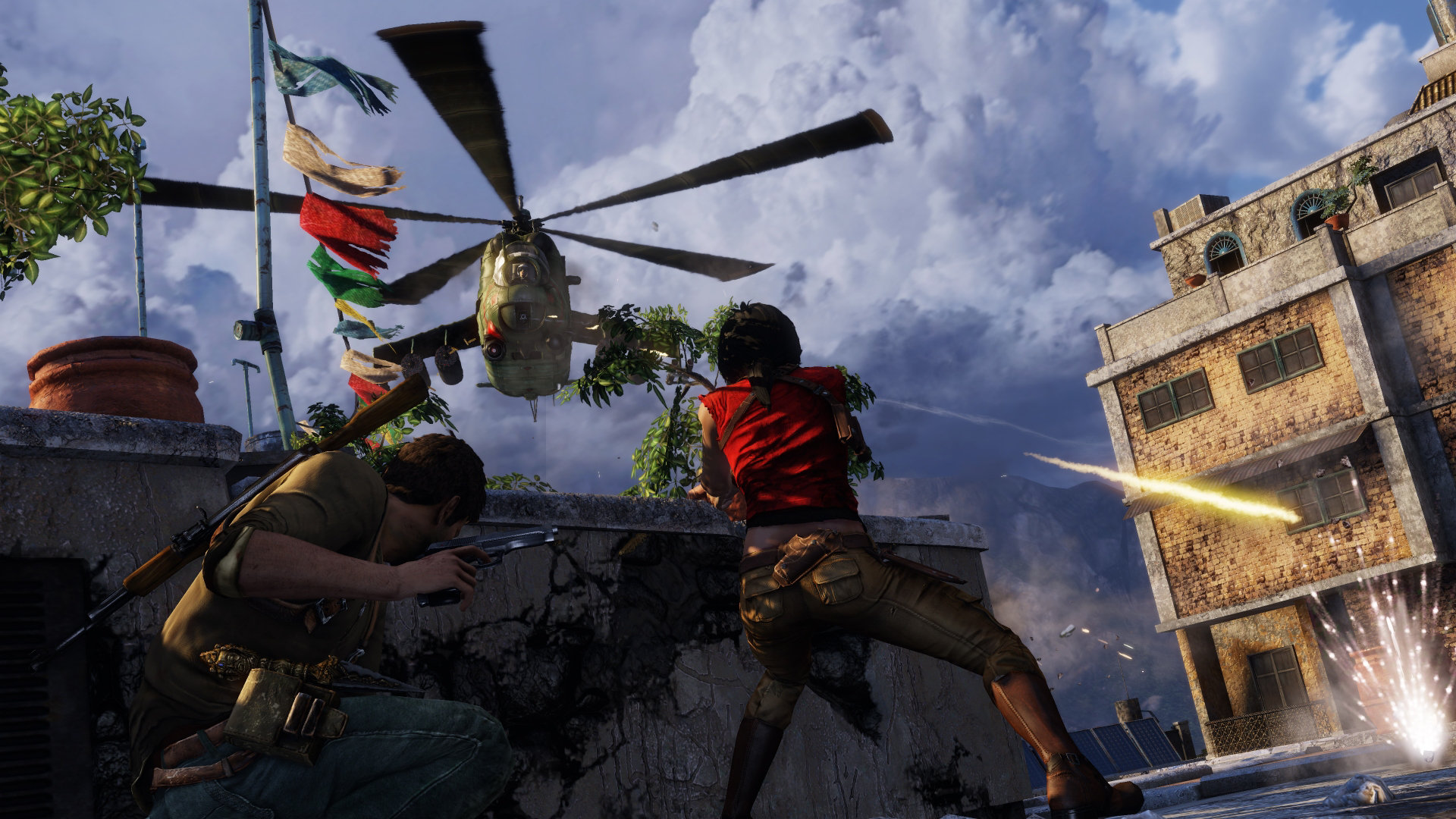 2007’s Uncharted: Drake’s Fortune was a good game, and even back then, it had the ingredients to become something special. But it lacked polish, it lacked that iconic flair that the series came to be known for in later years, and coming right after Gears of War, its cover-based third person shooter combat was deemed by many to be a bit too derivative. But Naughty Dog knew they were onto something special, that if they persisted, honed their craft, and doubled down on everything that made the first game good, they could deliver something truly spectacular.

That’s what they did with Uncharted 2: Among Thieves, and in this feature, we’ll be talking about the core elements that, in our opinion, made the game the masterpiece that it was. And the first element, as you would have probably guessed, is the cinematic quality of the game.

For years, video gams as a medium have been negotiating with technological restrains to establish themselves as a proper storytelling medium, and as technology has grown, so too has games’ ability to tell great stories, and tell them well. Cinematicism in games is easily found these days, and experiences that evoke the biggest Hollywood blockbusters in terms of their panache and flair are becoming more and more common. To say that it all started in earnest with Uncharted 2 would not be an exaggeration. 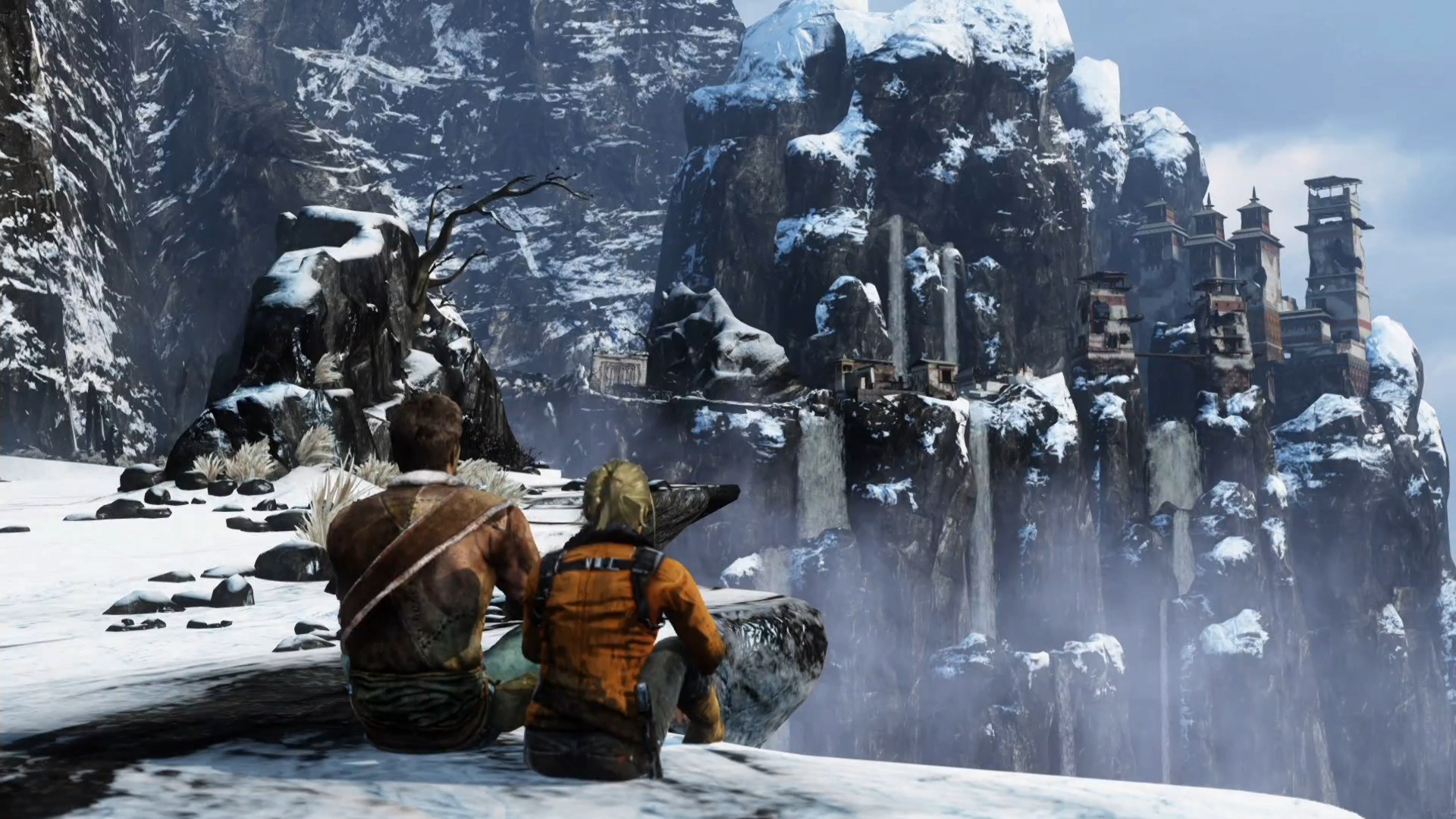 Naughty Dog have a knack for directing cutscenes in their games in truly cinematic fashion, and Uncharted 2 was when they really hit their stride. Other than the game’s strength in cinematography, its visuals also deserve a lot of credit for this, which was an area where Uncharted 2 was second to none when in first came out. But just as important was the excellent motion capture work done by Naughty Dog in the game, at a time when motion capture was far, far less commonly used in video games than it is now.

That, and the incredible performances given by Nolan North and co as the leading characters of the game, backed up by writing that did justice to all these characters and the banter and relationships between them, lent the game a cinematic quality that was unprecedented at the time. Even to this day, we’re getting games that try to deliver the sort of linear, handcrafted, guided, and cinematic experiences that Naughty Dog popularized back in 2009- it’s become an important part of the industry, of storytelling in games, and of single player games as a whole. The fact that one look at such games is enough to instantly show us what game they’re taking cues from should tell you something about just how good and influential Uncharted 2 was, and still remains.

But it’s not just during cutscenes that Uncharted 2 showcased its trademark flair and explosiveness. Even when you were playing the game, the action felt just as meticulously handcrafted and polished as it would during a completely scripted sequence where the player had no control- which brings us to the second core element of Uncharted 2 that we’re examining here today. The set pieces. 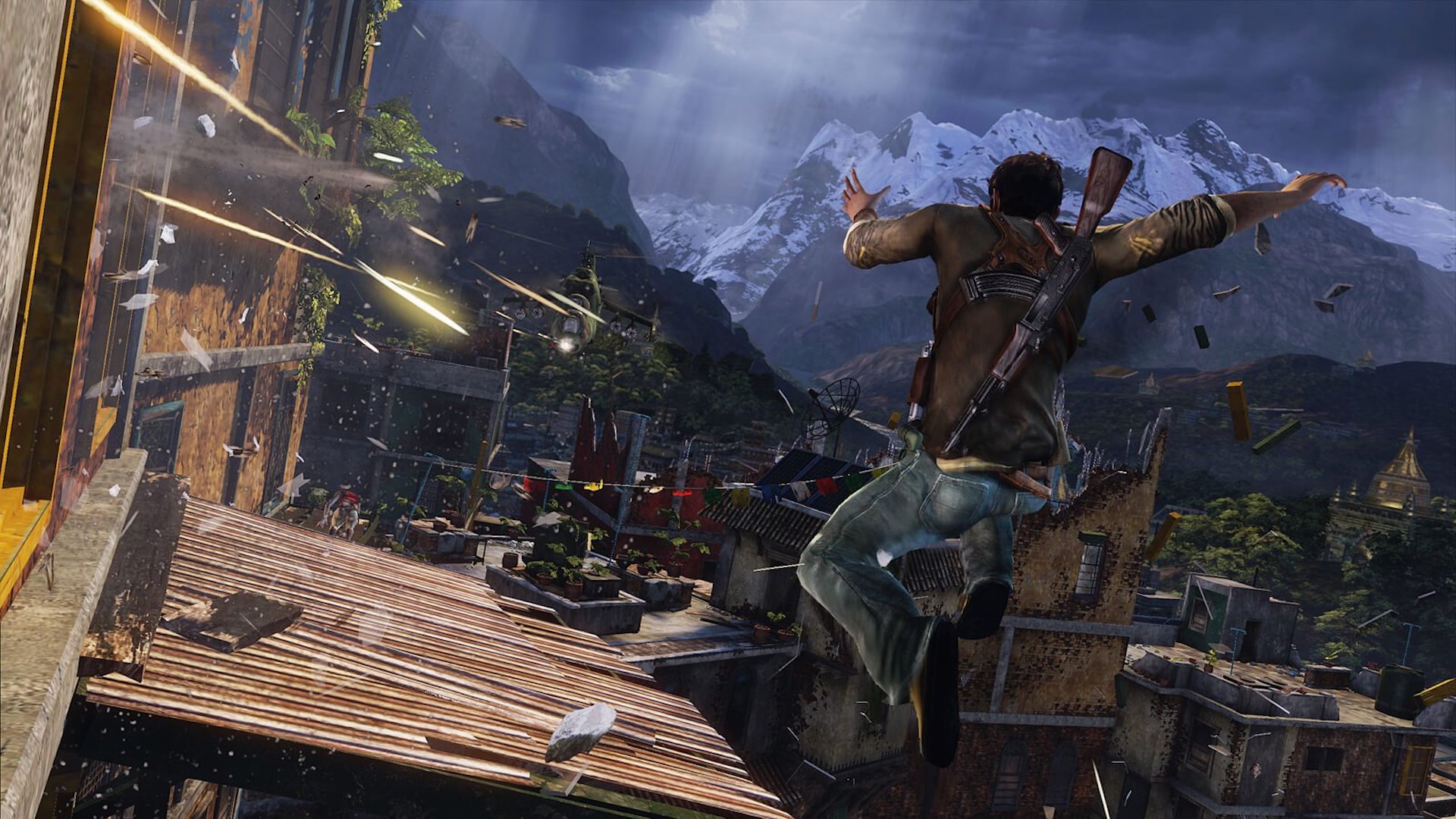 Blockbuster set piece moments that deliver memorable and thrilling moments of high-octane action are almost a necessity for action games in today’s day and age, and while Uncharted 2 was by no means the first game to have that, it was definitely the one that showed the industry and the audiences that these moments were far more important than we’d given them credit for. A good set-piece can truly elevate a game to a whole new level of quality, and Uncharted 2 was brimming with these moments.

From the game’s cold open with an injured Nate attempting to climb out of the wrecks of a train crash, to the collapsing building in Nepal, to the mother of all set-pieces- the train. Ah, the train. Those 20 minutes are considered by many to be among the best Uncharted as a series and Naughty Dog have ever delivered, and it’s easy to see why. The train set piece is, in many ways, a microcosm of Uncharted 2 as a whole. It’s fast, it’s cinematic, it’s unbelievably thrilling, and it delivers the sort of unbridled spectacle that this entire series has since then built its whole identity around.

In the years since then, Uncharted has tried to outdo what it did with set-pieces in Among Thieves multiple times. The crashing plane, the sinking ship, and the horse chase in Uncharted 3. The convoy chase in Madagascar and the collapsing building in Uncharted 4. That other train set-piece in Uncharted: Lost Legacy. Each of those have been excellent and memorable in their own right, and many might even argue that they were better than the train in Uncharted 2. But if it were not for that train sequence, it’s fair to say that this whole huge part of Uncharted’s identity would not even exist. 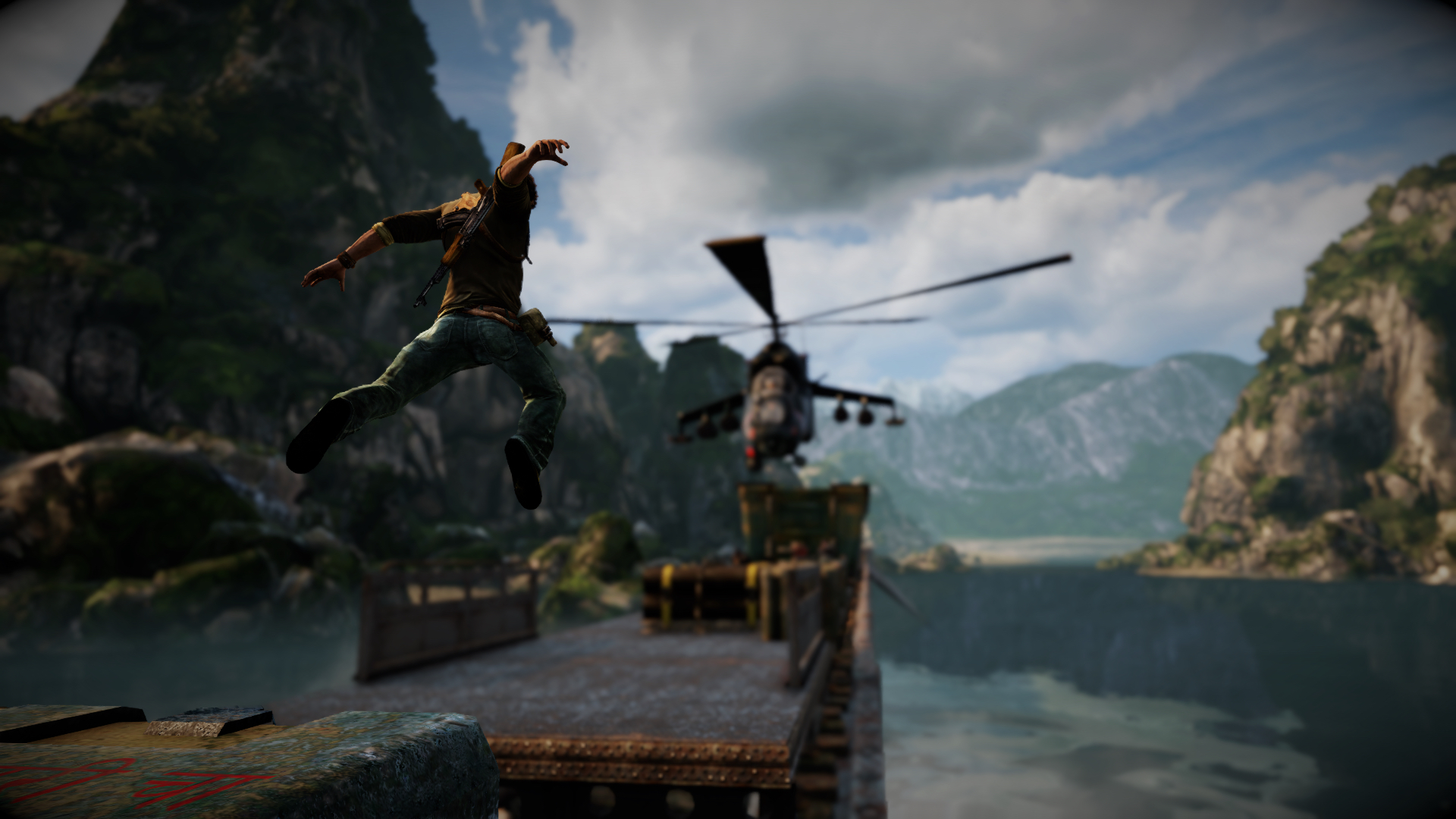 Since Uncharted 2, with every new game, Naughty Dog have built on the foundations of the genius of that game to hone their craft further and further still, to the point where they’re undountedly among the three or four best developers in the industry by now. No one can call them a one-hit wonder – not even close – what with them having delivered a steady line of incredible games even after Uncharted 2, and the likes of The Last of Us and Uncharted 4: A Thief’s End being in that same pantheon of quality (not to mention the upcoming The Last of Us Part 2, which, if things don’t go wrong, will probably be in that same category as well). But though Uncharted 2 isn’t the be-all-and-end-all when it comes to Naughty Dog’s success and accomplishments, there shouldn’t be any doubt in anyone’s minds that if it were not for Uncharted 2, Naughty Dog would not be what they are today. And that’s not just a huge miss for PlayStation, but for the entire medium as a whole.