AMD is ringing in the new year with an ode to RDNA, a new mainstream graphics card going by the name of AMD Radeon RX 5600 XT. It’s a familiar sight, too. Equipped with a Navi 10 XLE GPU, by and large identical to that in the RX 5700, this chipper, budget-friendly card is eyeing up the spot currently occupied by Nvidia’s RTX 2060.

The Radeon RX 5600 XT’s main rival is currently resting around the $299 mark – following a pre-emptive price cut from Nvidia. That, in turn, places overwhelming pressure on the Radeon RX 5600 XT to deliver at its $279 MSRP ($289 for the Sapphire Pulse reviewed here). In return for Nvidia’s pricing slight, AMD is slinging enhanced RX 5600 XT BIOSes capable of driving clock speeds and memory bandwidth far surpassing that which was initially touted during its CES announcement.

All of which plays right into our hands as consumers. Both AMD and Nvidia are engaged in a bitter back and fourth for gamers’ attention, and we’re basking in cheap, better-performing graphics cards as a result. The Radeon RX 5600 XT is here to claim the fiercely-contended upper echelons of the 1080p market in the name of team red, but will Navi 10, overhauled vBIOS in-hand, have what it takes to seize the crown right off of Nvidia’s head?

The Radeon RX 5600 XT stands out as the most spontaneous graphics card of a rollercoaster generation. I’m reticent to believe AMD’s best laid plans initially envisioned a graphics card between the RX 5500 series and RX 5700 series, especially not one six months down the line – not unless it’s been waiting on RX 580 stock to dwindle. So too is its last-minute BIOS update, which will have come too late to be applied to every shipped card in the channel, symptomatic of a market stocked to the brim with reactionary products fighting over inches.

As I said, there’s a disparity in what was promised by AMD at CES and what is now whirring away in our test bench. At the core of the RX 5600 XT lies a Navi 10 XLE, a (not really) pared down GPU likened to the Navi 10 XL within the AMD RX 5700.

The Navi 10 XLE GPU is privy to 2,304 RDNA cores, segmented across 36 Compute Units (CUs). Once flying the AMD Navi banner, the RDNA architecture powering each core is built on the 7nm process node and incorporates greater performance per watt and optimisations tailored to the latest games. 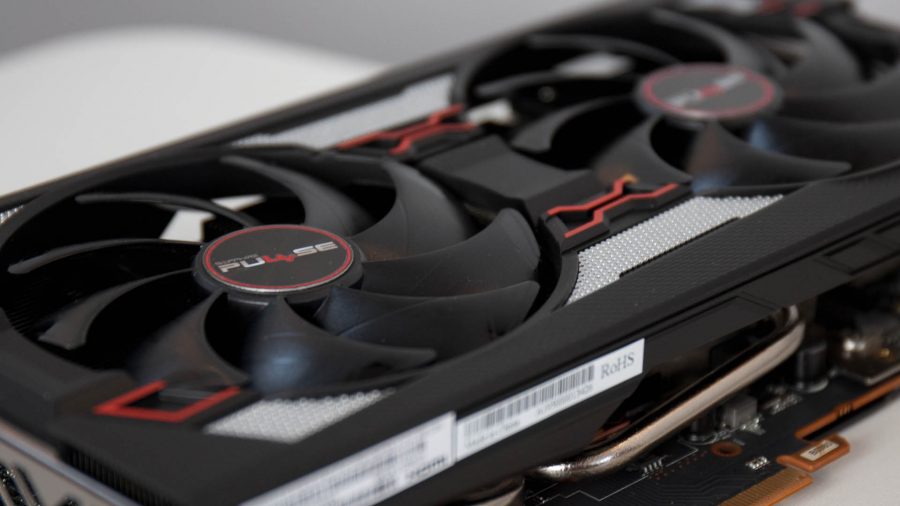 As reactionary a launch as this one appears to be, and with very little guidance from AMD on the matter, we can only lay out the clock speeds and memory speeds for the Sapphire Pulse Radeon RX 5600 XT – our supplied review unit. Thanks to rather confused messaging from AMD, the specifications laid out below may not accurately reflect all available cards spanning its multitude of AIB partners at launch.

You may remember a handy third-party utility, the MorePowerTool, that unlocked the RX 5700 to nigh-on the same clock speeds as the RX 5700 XT. With the RX 5600 XT, however, it would appear AMD is offering the same service via a sanctioned (coerced) AIB vBIOS update instead.

This is an industry wide push engineered by AMD to hinder Nvidia’s RTX 2060 following its timely $299 price drop, and to bolster its own card’s performance. And it would appear that similar firmware updates are being distributed by most AIB manufacturers.

We highly recommend updating your RX 5600 XT vBIOS once you’ve got your mitts on your shiny new card – providing you’re running unpatched gear and there’s an updated specification available. For more information, check out our RX 5600 XT BIOS update guide.

We’ve also heard that at least Asus will be reaching out to retailers to update the BIOS prior to a card reaching customer’s hands. Sapphire tells us that most cards in the channel, and all of those departed for the US, are running the updated BIOS and do not require updating. Perhaps a few AIBs were aware of the impending update prior to others… awkward.

But I could rant about AMD’s rushed vBIOS update all day, so let’s instead look towards gaming performance, and we’ve got plenty to talk about. For all further testing in this review we’ll be opting for the Performance vBIOS.

With a Navi 10 GPU and 14Gbps GDDR6, performance only marginally off the pace of the RX 5700 is none too surprising. The RX 5600 XT performs anywhere from single-digit to a roughly 10% that of the RX 5700 – a mighty showing for a card that starts out some $40 cheaper than today’s market.

If we look at the RX 5600 XT’s initial target, the GTX 1660 Ti, as per AMD’s own slides during its CES 2020 press conference, the RX 5600 XT has well and truly crushed it; a cold and calculated assassination. Delivering above and beyond the average frame rate of the 16-series Turing card, the RX 5600 XT is on all counts the better buy.

Yet the GTX 1660 Ti has already been knocked off the mainstream throne by the GTX 1660 Super, a welcome rehash spurned once again from healthy competition. As a result, it’s a close-fought battle between the RX 5600 XT and Nvidia’s GTX 1660 Super, the sub-$250 champion. If you’ve the flexibility to make up the cash elsewhere in your build, AMD just edges ahead here. 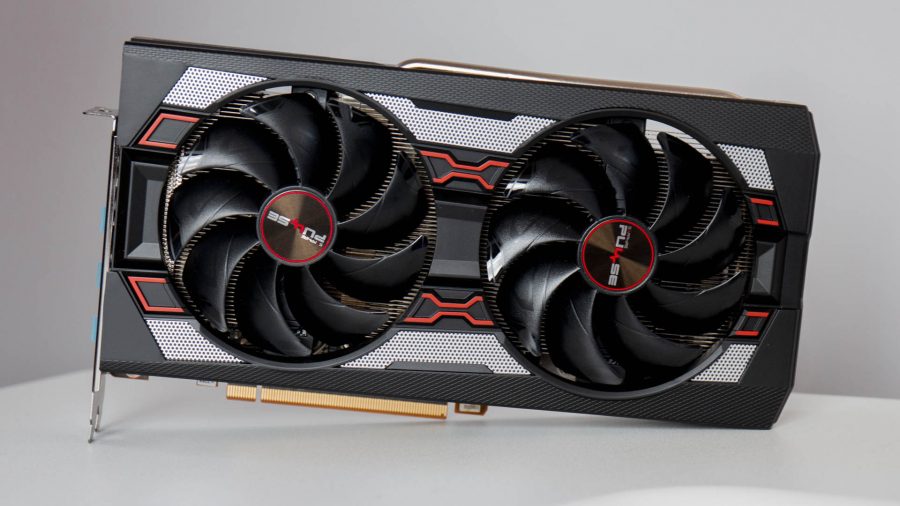 However, we’re no longer considering the RX 5600 XT as merely a 16-series competitor. Since the performance overhauling BIOS update, it’s now a question of RX 5600 XT vs. RTX 2060. And it’s a close-run battle, too.

We’ve put together a handy guide on how to update your RX 5600 XT firmware for maximum performance.

This key battle is won and lost on developer API support. Nvidia’s Turing architecture has long been the weapon of choice for DX11 gaming, and its optimisations have proven time and time again instrumental in the company’s leading performance. However, in most of the DX11 titles we tested, and pan resolution, the RX 5600 XT holds the line to match the RTX 2060.

Like GCN-based Vega before it, RDNA proves its worth in videogames built around Microsoft’s latest API version, DX12. Making for stark comparison to its DX11 showing, the RX 5600 XT pulls away from the RTX 2060 by roughly 10% across all tested DX12 benchmarks.

Teetering entirely on in-game API, you are looking at a potential 10% performance delta between the RX 5600 XT and RTX 2060.

The RX 5600 XT appears to be running merrily at 1,700MHz for the most part, which even for its upgraded vBIOS is a little above and beyond the rated game clock (AMD’s measure of real-world frequency under load). It does make you wonder how much performance AMD was initially going to leave on the table had it not ordered its AIBs to act – yet here we are with a healthy dose of state-sanctioned performance and I for one am not going to look a gift horse in the mouth.

The bump up from 12Gbps to 14Gbps via firmware also appears to be of little concern for the Sapphire card’s componentry. In fact, with a PCB likely ripped out of an RX 5700, and memory seemingly to match, there are far more similarities between the RX 5600 XT and RX 5700 than first appearances led on.

Yet despite glaring similarities, there’s just enough wiggle room in the RX 5700 to validate its spot for a little more moolah. Especially if you’re inclined to tinkering with it to reach its full overclocking potential, of which there’s likely little left within the RX 5600 XT.

As for power and thermal performance, the RX 5600 XT’s vBIOS rates it to 160W, only a little shy of the 180W RX 5700. Overall platform power is therefore near-identical between the two, with Nvidia’s RTX 2060 underneath by a sliver. Dispersing all that heat is a rather dependable twin-fan cooler managing a quiet 67°C under load.

With an MSRP of $289 (£255), the Sapphire Pulse RX 5600 XT is an enticing proposition for gamers seeking rapid refresh rates or high-quality 1440p gaming. AMD’s delivering a powerful package with pricing on its side, and its mere existence has once again whipped up enough commodious competition to shake up Nvidia’s pricing structure for the best.

The only potential counterpoint to the RX 5600 XT’s dominance is the inclusion of hardware-accelerated RT Cores for real-time ray tracing on the RTX 2060. I’d lean towards the 10% performance delta myself, but if you’re hankering for a little ray-traced Minecraft then you’ll have to find your fix elsewhere.

Frankly, AMD’s doing the RX 5600 XT dirty. The Sapphire Pulse RX 5600 XT is more than the “ultimate graphics card for 1080p gaming” that it’s brandished as across the official website. Ever since those heightened vBIOSes landed the RX 5600 XT has been fiercely contending with a gutsy and unrivalled 1440p card from team green. While “adequate graphics card for 1440p gaming” is a little less punchy, it’s a much more alluring prospect once you can’t see the wood for the trees in the absolutely stacked mid- to high-end GPU market.

Despite its messy launch, and Nvidia’s best efforts to lower price, AMD’s manage to corral the RX 5600 XT in such a way that it has this resolutely 1440p graphics card sitting in a league of its own.

Serving up admirable 1440p performance in the eleventh hour, the Radeon RX 5600 XT delivers faster performance for less money than the competition.