With a global pandemic still raging on, video games have looked to be standouts in profitable entertainment. The industry was already the largest entertainment medium, and it doesn’t look like that’s about to change.

Activision saw growth across all IPs, however, the largest came from Call of Duty: Mobile and Warzone. Warzone has now reached over 75 million players, with hours played increasing eight-fold. Call of Duty: Mobile has risen on mobile stores in the US, with the games in-game economy reaching new quarterly records; roughly five times higher than last year.

Blizzard also shared some positive quarterly reports. With 32 million active users, and an increase in World of Warcraft since Classic launched, specifically citing engagement around the latest Ahn’Qiraj release in July. Shadowlands’ impending release later this year has also driven large pre-sales numbers, with Activision noting “highest engagement in a decade” for the popular MMO. 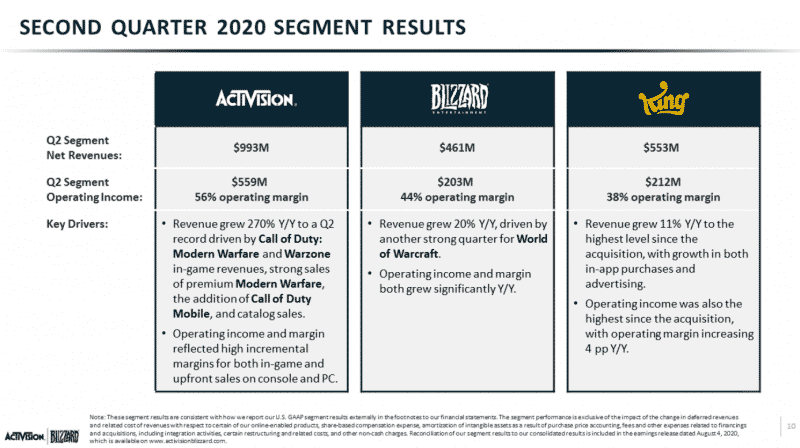 Overwatch has also seen an increase in players returning to the game; while Hearthstones’ recent expansions and Battlegrounds update has seen great success. Only one mention of Diablo in the report — with the company mentioning the imminent release of Diablo: Immortals on mobile, with internal playtesting starting in the coming weeks. A full release is still unknown.

Lastly, King had 271 million active users in the second quarter. Candy Crush continues to be the main focus, with the game growing double-digit percentages, as the game climbs to the top of the US app store revenue chart.

As always with investor calls, new game reveals often come out. The conference call did confirm that Treyarch and Raven will be developing the 2020 Call of Duty title. While we have no idea of the details of the title, the Xbox X Series and PS5 releases in 2020 will likely see Call of Duty showcased at one of the two companies big reveal events in the coming months.

Lastly, in the Q&A portion, it was confirmed that BlizzCon will return in early 2021 as a virtual event. We don’t have any details about what will be shown — though BlizzCon 2020 was likely to have a fair few big stories. Overwatch 2, Diablo 4 and Shadowlands are all well into development and bar WoW, we’ve heard very little about the former since their first reveal.

How to propose with gamer style This is how media works